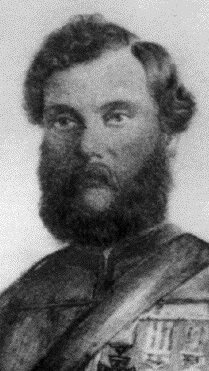 From 30 June 1857 the siege of the Residency Compound lasted almost five months. A first Relief Force reached the city on 25 September and a second on 17 November. The decision was taken to withdraw from the Residency and the garrison left on 22 November. Lucknow was finally recaptured by the British on 21 March 1858. Lieutenant R H M Aitken commanded a detachment of loyal troops from the 11th Native Infantry during the actions for which he was awarded the VC. Of these, Actions 3 and 4 in his Citation related to the First Relief of Lucknow. The Captain’s Bazaar lay between the Compound and the River Gumti. The Baillie Guard Gate was key to the defences at the east of the Compound. The Tehri Kothi was to the east of the gate and the Farhat Baksh, a town house built on the Gumti by the French adventurer and soldier Claude Martin in the late eighteenth century, to the east of that.

For various acts of gallantry performed during the defence of the Residency of Lucknow, from the 30th of June to the 22nd of November, 1857. 1. On three different occasions, Lieutenant Aitken went into the garden under the enemy’s loopholes in the “Captain’s Bazaar.” On two of these occasions, he brought out a number of bullocks which had been left in the garden;- subsequently, on the 3rd of July, the enemy having set fire to the Bhoosa Stock in the garden, and it being apprehended that the fire would reach the Powder Magazine which had been left there, Lieutenant Aitken, accompanied by other Officers, went into the garden, and cut down all the tents which might have communicated the fire to the powder. This was done, close to the enemy’s loopholes, under a bright light from the flames. It was a most dangerous service. 2. On the night of the 20th of August, the Enemy having set fire to the Baillie Guard Gate, Lieutenant Aitken was the first man in the gateway, and, assisted by some sepoys and a water- carrier of his Regiment, he partially opened the gate under a heavy fire of musketry, and, having removed the burning wood and straw, saved the gate. 3. On the evening of the 25th of September, this Officer led on twelve sepoys of his Regiment, for the purpose of attacking two guns opposite the gate referred to, in order to prevent their being turned on the late Major-General Havelock’s second column. Having captured them, he attacked and took the Teree Kotee, with a small force. 4. On the morning of the 26th of September, with a small party of his Regiment, he assaulted and captured the barricaded gateway of the Furreed Buksh Palace, and the Palace itself. On this occasion, he sprang up against a small wicket gate on the right, and prevented the enemy from shutting it, until, with assistance, it was forced open, and the assaulting party were thus enabled to rush in. The complete success of the attack was solely owing to this Officer’s distinguished bravery. 5. In a subsequent sortie on the 29th of September, Lieutenant Aitken volunteered to take a gun which still continued firing, taking with him four soldiers through the houses and lanes to the gun. The enemy fired on this party from the houses, but they held their ground, until a stronger party coming up, the gun was upset from its carriage, and taken into the Residency. Another gun was subsequently taken.