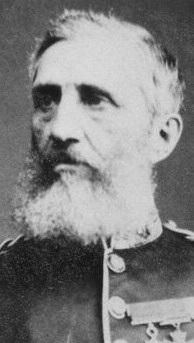 ndore in Central India was over four hundred miles south-west of Delhi. In the middle of June 1857 Colonel J Travers arrived with a detachment of Bhopal Cavalry to provide assistance, should it be needed, to Colonel Henry Durand, RE, Acting Governor-General’s Agent for Central India. The Maharaja of Indore, Holkar Tukoji Rao II, had supplied three companies of infantry but on 1 July these troops mutinied, murdered any Europeans they could find and besieged the Residency in which most Europeans had taken refuge the day before. Durand and Travers had too few resources to withstand a long siege and the Residency was evacuated. Protected by an escort of Bhopal Cavalry, they and their party arrived at Sehore, eighty-three miles to the north-east, on 4 July. Indore was eventually recaptured on 15 December 1857.

For a daring act of bravery, in July, 1857, when the Indore Presidency was suddenly attacked by Holkar’s Troops, in having charged the guns with only five men to support him, and driven the Gunners from the guns, thereby creating a favourable diversion, which saved the lives of many persons, fugitives to the Residency. It is stated that Officers who were present considered that the effect of the charge was to enable many Europeans to escape from actual slaughter, and time was gained which enabled the faithful Bhopal Artillery to man their guns. Colonel Travers’s horse was shot in three places, and his accoutrements were shot through in various parts. He commanded the Bhopal Levy.