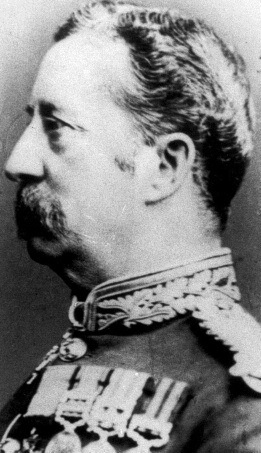 On 14 August 1857 a cavalry detachment commanded by Lieutenant W S R Hodson left the British Camp outside Delhi to intercept a group of mutineers from the city who had set out to the north-west and who it was feared, might attempt to cut the Grand Trunk Road connecting the British with the Punjab. On the 15th, during an attack on some of the rebels who had barricaded themselves in a house at Khurkowdah, near Rohtak, Lieutenant C J S Gough saved the life of his brother, Lieutenant H H Gough VC. On 18 August rebels attacked Hodson’s force at Rohtak but were beaten off. At the beginning of 1858 Hodson and his men were part of the force Sir Colin Campbell was gathering to recapture Lucknow. Campbell was at Fatehgarh on the Ganges, north-west of Lucknow. To suggest to the rebels that he intended to attack Rohilkhand, rather than Oudh to its south-east, he sent a column under Brigadier J Hope Grant along the Ramganga river. The column defeated the rebels at Shamshabad on 27 January 1858. In February Hope Grant’s force was sent to pursue Nana Sahib and on 23 February 1857 on its way towards Lucknow defeated the rebels at Meeanganj. During the battle Gough saved the life of Major Anson.