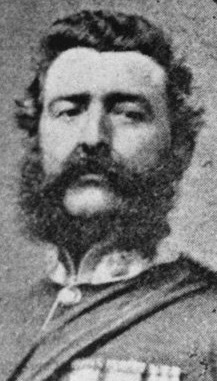 Having withdrawn from Oudh in mid August 1857 to counter a fresh threat to Cawnpore from Nana Sahib, on 19 September Major General Havelock recrossed the Ganges to begin his second advance on Lucknow. On 21 September, he defeated the rebels at Mungulwar. Lieutenant W Rennie charged the enemy guns (he was subsequently to distinguish himself in the advance to the Residence at Lucknow). During the battle Sergeant P Mahoney, having killed three rebels with his sword, captured the Colour of the 1st Bengal Native Infantry. Even after three of his fingers had been sliced off, he continued to charge the enemy, until he lost consciousness.

For conspicuous gallantry in the advance upon Lucknow, under the late Major-General Havelock, on the 21st of September, 1857, in having charged the enemy’s guns in advance of the skirmishers of the 90th Light Infantry, under a heavy musketry fire, and prevented them dragging off one gun, which was consequently captured. For conspicuous gallantry at Lucknow on the 25th of September, 1857, in having charged in advance of the 90th column, in the face of a heavy fire of grape, and forced the enemy to abandon their guns.