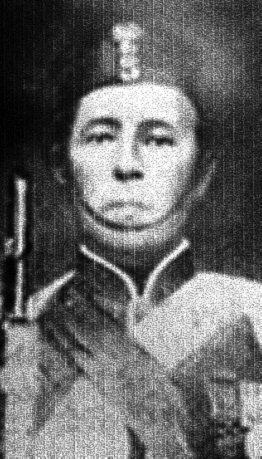 On 23 September 1857 Major General Havelock’s army, advancing from the south-west, defeated an enemy force at the Alam Bagh, a garden palace outside Lucknow, chasing the rebels as far as the Char Bagh Bridge across the canal which ran round the south of the city. The army then bivouacked near the Alam Bagh. Here on the 24th it was attacked by mutineers but they were driven off. Meanwhile, a party from the 5th Regiment under Lieutenant J Brown reconnoitred the enemy’s position.

For conspicuous devotion at Alumbagh, on the 24th September, 1857, in proceeding under a heavy and galling fire to save the life of Private E. Deveney, whose leg had been shot away, and eventually carrying him safe into camp, with the assistance of the late Lieutenant Brown, and some comrades.
VICTORIA CROSS. Erratum in the London Gazette of Tuesday, June 19, 1860. In the notification of Her Majesty’s intention to confer the Victoria Cross on three soldiers of Her Majesty’s Army, For, 1st Battalion, 5th Regiment, Serjeant Robert Ewart, Read, 1st Battalion, 5th Regiment, Serjeant Robert Grant.