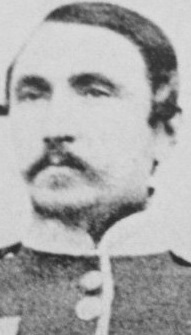 A party, on the 26th of September, 1857, was shut up and besieged in a house in the city of Lucknow, by the rebel sepoys. Private James Hollowell, one of the party, behaved, throughout the day, in the most admirable manner; he directed, encouraged, and led the others, exposing himself fearlessly, and by his talent in persuading and cheering, prevailed on nine dispirited men to make a successful defence, in a burning house, with the enemy, firing through four windows. (Extract from Divisional Orders of Major-General Sir James Outram, G.C.B., dated 14th October, 1857.)