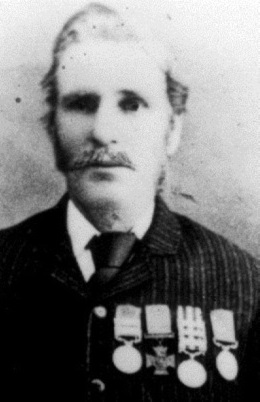 After the recapture of Delhi, Colonel E H Greathed led a force into the Gangetic Doab, the area between the two Rivers Jumna and Ganges. On 28 September 1857 Greathed confronted the forces of Nawab Walidad Khan at Bulandshahr, fifty miles south-east of Delhi. One of the British columns was engaged by the enemy at a crossroads outside the town, while the other column, with two guns under Lieutenant G Cracklow, was engaged in heavy fighting within it. Once Bulandshahr was secured, Walidad Khan’s abandoned stronghold at Malagarh, five miles away, was also taken. This was destroyed on 1 October but Lieutenant D C Home VC, sole survivor of the group of engineers who had blown up the Kashmir Gate two weeks earlier, was accidentally killed in the process. Greathed’s column then advanced south to Agra.

“For an act of valour performed in action against the rebels and mutineers at Boolundshur, on the 28th September, 1857, when these two soldiers evinced the most determined bravery in working their gun under a very heavy fire of musketry, whereby they cleared the road of the enemy, after every other man belonging to it had been either killed or disabled by wounds.” (Despatch of Major Turner, Bengal Horse Artillery, dated Boolundshur, 2nd October, 1857.)