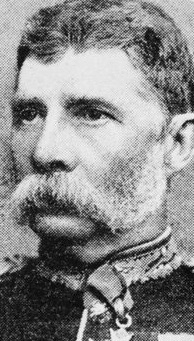 The mutiny of troops at Indore on 1 July 1857 was symptomatic of unrest elsewhere in Central India. That same month Mundisore, north-west of Indore, was occupied by rebels. It was not until 21 November 1857 that a British column under Sir H M Durant reached Mundisore from Mhow. A fierce engagement with the rebels took place outside the town. The following day Durant captured Goraria to the north and Mundisore was evacuated by the mutineers. Durant now marched south to Indore which submitted on 15 December. His troops were then incorporated in Sir Hugh Rose’s Central India Field Force. In January 1858 Rose advanced north-east through Bhopal. At the end of the month, he besieged Ratgurh, just west of Saugor. He then moved north against Jhansi. It was just south-east of Jhansi on 1 April 1858 at the Battle of the Betwa that Rose defeated an attempt by Tantya Tope to relieve the city.

For conspicuous bravery on the 21st of November, 1857, at Mundisore, in saving the life of Lieutenant G. Dew, 14th Light Dragoons, at the risk of his own, by attempting to cut down a Velaitee, who covered him (Lieutenant Dew) with his piece, from only a few paces to the rear. Lieutenant Prendergast was wounded in this affair by the discharge of the piece, and would probably have been cut down, had not the rebel been killed by Major Orr. He also distinguished himself by his gallantry in the actions at Ratgurh and Betwa, when he was severely wounded. Major General Sir Hugh Rose, in forwarding his recommendation of this Officer states:- “Lieutenant Prendergast, Madras Engineers, was specially mentioned by Brigadier, now Sir Charles Stuart, for the gallant act at Mundisore, when he was severely wounded; secondly, he was ‘specially mentioned’ by me when acting voluntarily as my Aide-de-Camp in the Action before besieging Ratgurh, on the Beena River, for gallant conduct. His horse was killed on that occasion. Thirdly, at the Action of ‘the Betwa,’ he again voluntarily acted as my Aide-de-Camp, and distinguished himself by his bravery in the charge, which I made with Captain Need’s Troop, Her Majesty’s 14th Light Dragoons, against the left of the so-called Peishwa’s Army, under Tantia Topee. He was severely wounded on that occasion.”