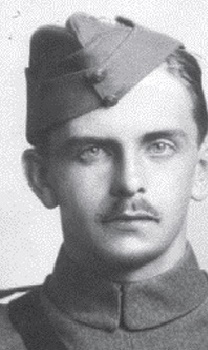 On 7 November 1915 Second Lieutenant G S M Insall took off from Bertangles, just north of Amiens, in a Vickers FB5 (Fighting Biplane 5) ‘Gunbus’, with Air Mechanic T H Donald as his gunner. Having downed a German Aviatik, he then flew over the German trenches, which Donald fired upon. When the plane was hit in the fuel tank by small arms fire, Insall was able to make an emergency landing at Agny, just south of Arras. Donald was awarded the DCM for his part in the action.

For most conspicuous bravery, skill and determination, on 7th November, 1915, in France. He was patrolling in a Vickers Fighting Machine, with First Class Air Mechanic T. H. Donald as gunner, when a German machine was sighted, pursued, and attacked near Achiet. The German pilot led the Vickers machine over a rocket battery, but with great skill Lieutenant Insall dived and got to close range, when Donald fired a drum of cartridges into the German machine, stopping its engine. The German pilot then dived through a cloud, followed by Lieutenant Insall. Fire was again opened, and the German machine was brought down heavily in a ploughed field 4 miles south-east of Arras. On seeing the Germans scramble out of their machine and prepare to fire, Lieutenant Insall dived to 500 feet, thus enabling Donald to open heavy fire on them. The Germans then fled, one helping the other, who was apparently wounded. Other Germans then commenced heavy fire, but in spite of this, Lieutenant Insall turned again, and an incendiary bomb was dropped on the German machine, which was last seen wreathed in smoke. Lieutenant Insall then headed west in order to get back over the German trenches, but as he was at only 2,000 feet altitude he dived across them with greater speed, Donald firing into the trenches as he passed over. The German fire, however, damaged the petrol tank, and, with great coolness, Lieutenant Insall landed under cover of a wood 500 yards inside our lines. The Germans fired some 150 shells at our machine on the ground, but without causing material damage. Much damage had, however, been caused by rifle fire, but during the night it was repaired behind screened lights, and at dawn Lieutenant Insall flew his machine home with First Class Air Mechanic T. H. Donald as a passenger.