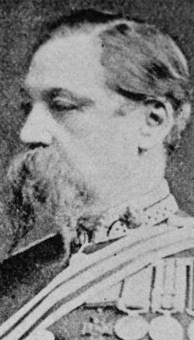 By 1 March 1858 Brigadier T H Franks’ column, which was advancing on Lucknow from the south-east along the line of the River Gumti, was only thirty miles from Lucknow.

This Officer, Commanding the 3rd Sikh Cavalry on the advanced Picquet, with one hundred of his men, having obtained information, just as the Force marched on the morning of the 1st of March last, of the proximity, three miles off the high road, of a body of 500 Rebel Infantry, 200 Horse, and 2 Guns, under Moosahib Ali Chuckbdar, attacked and utterly routed them, cutting up more than 100 men, capturing two guns, and driving the survivors into, and over, the Goomtee. This feat was performed under every disadvantage of broken ground, and partially under the flanking fire of an adjoining Fort. Lieutenant Aikman received a severe sabre cut in the face in a personal encounter with several of the enemy.