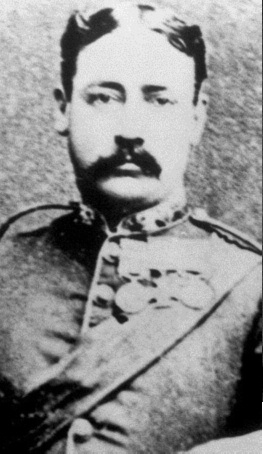 On 9 March 1858, while Sir James Outram’s force advanced along the far side of the River Gumti at Lucknow, on the southern side of the Gumti Sir Colin Campbell launched a successful attack on La Martinière led by the 42nd Highlanders. When it had been secured, Outram’s men on the other side of the river realized that enemy guns protecting the mutineers’ defence line along the canal skirting the south of the city had been abandoned. Lieutenant T A Butler, 1st Bengal (European) Fusiliers, swam the Gumti and braved enemy fire to bring news of this to Campbell’s men, who then occupied the deserted positions. Butler then swam back to rejoin his own regiment.

“Of which success the skirmishers on the other side of the river were subsequently apprised by Lieutenant Butler, of the Bengal Fusiliers, who swam across the Goomtee, and, climbing the parapet, remained in that position for a considerable time, under a heavy fire of musketry, until the work was occupied.” (Extract of Lieutenant-General Sir James Outram’s memorandum of operations carried on under his command at the siege of Lucknow, published in the Governor-General’s Gazette Extraordinary, of the 5th April, 1858, and re-published in General Orders by the Commander- in-Chief in India, on the 27th of December, 1858.)