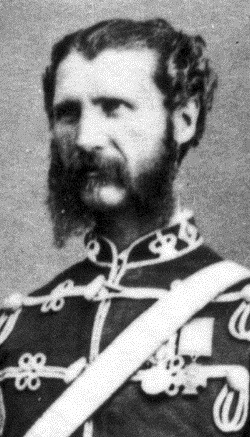 Jhansi, 250 miles south of Delhi, was one of eight princely states to pass under direct British rule by the doctrine of ‘lapse’, which ignored the traditional Indian practice of childless rulers being able to adopt heirs. The last Rajah had died in 1853 and the British had refused the request of his widow, Lakshmi Bai, to recognize their adopted son. The garrison had mutinied in June 1857 and massacred the Europeans in the city. On 21 March 1858 Sir Hugh Rose, commanding the Central Indian Field Force, arrived in front of Jhansi and on the 25th opened a bombardment of the city. However on 31 March a large rebel army under Tantya Tope crossed the Betwa river south-east of Jhansi, with the intention of relieving the city. On 1 April Tantya Tope attacked, but his troops were routed and driven back across the Betwa. In the course of the battle Rose put himself at the head of Captain Need’s 14th Dragoons in a charge against the enemy. His aide-de-camp, Lieutenant H N D Prendergast VC, Madras Sappers and Miners, distinguished himself in this charge, while Lieutenant J Leith VC went to Need’s assistance. Lieutenant H S Cochrane VC, 86th Regiment of Foot, also distinguished himself in the action.

For conspicuous gallantry near Jhansi, on the 1st of April, 1858, when No. 1 Company of the Regiment was ordered to take a gun, in dashing forward at a gallop, under a heavy musketry and artillery fire, driving the enemy from the gun, and keeping possession of it till the Company came up. Also for conspicuous gallantry in attacking the rear-guard of the enemy, when he had three horses shot under him in succession. Despatch from Major-General Sir Hugh Henry Rose G.C.B., dated 23rd April, 1858.