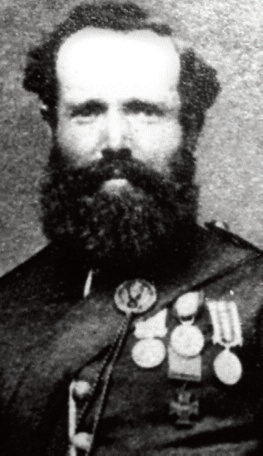 On 17 March 1858 Kunwar Singh, Rajah of Jagdispur, crossed the Ganges and on 26 March, having defeated a British force under Colonel Milman, occupied Azamgarh 56 miles north- east of Benares, posing a threat to British communications along the Grand Trunk Road. Colonel Lord Mark Kerr was sent to assist Milman, who was besieged outside the town. On 6 April Kunwar Singh attacked Kerr’s force a couple of miles from the town but was repulsed. However, Kerr’s force was not strong enough to take Azamgarh itself.

For conspicuous gallantry near Azimghur, on the 6th of April, 1858, in having defended, and finally rescued, Private Benjamin Milnes, of the same Regiment, when severely wounded on the Baggage Guard. Serjeant Napier remained with him at the hazard of his life, when surrounded by Sepoys, bandaged his wound under fire, and then carried him in safety to the convoy. Despatch from Colonel Lord Mark Kerr, C.B., dated 2nd August, 1858.