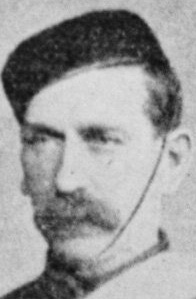 Sir Edward Lugard had left Lucknow on 29 March 1858 to relieve Azamgarh. He reached it on 15 April, capturing the Bridge of Boats over the River Tonse to the west of the town. Kunwar Singh and his followers abandoned Azamgarh, retreating east towards the Rajah’s ancestral lands at Jagdispur. However, to cover his withdrawal Kunwar Singh mounted a stiff rearguard action.

On the evacuation of Azimgurh by Koer Sing’s Army, on the 15th of April, 1858, a Squadron of the Military Train, and half a Troop of Horse Artillery, were sent in pursuit. Upon overtaking them, and coming into action with their rear-guard, a Squadron of the 3rd Seikh Cavalry (also detached in pursuit), and one Troop of the Military Train, were ordered to charge, when Lieutenant Hamilton, who commanded the Seikhs, was unhorsed, and immediately surrounded by the Enemy, who commenced cutting and hacking him whilst on the ground. Private Samuel Morley, seeing the predicament that Lieutenant Hamilton was in, although his (Morley’s) horse had been shot from under him, immediately and most gallantly rushed up, on foot, to his assistance, and in conjuction with Farrier Murphy, who has already received the Victoria Cross for the same thing, cut down one of the Sepoys, and fought over Lieutenant Hamilton’s body, until further assistance came up, and thereby was the means of saving Lieutenant Hamilton from being killed on the spot.