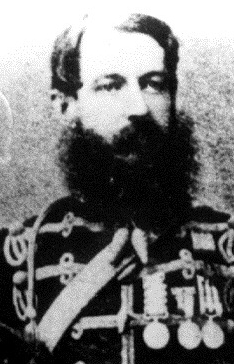 The day after the Battle of Morar, Brigadier M W Smith and his column had been ordered by Sir Hugh Rose to halt at Kotah-ki-Serai, east of Gwalior. To pre-empt an assault by the rebels, he launched an attack on them. This was met by the cavalry of the Gwalior Contingent and Smith ordered the 8th Hussars under Lieutenant T N Hicks to charge them. They swept forward through enemy batteries near the Phoolbagh Palace at Gwalior and brought back two of the guns with them. The Rani of Jhansi, dressed as a cavalryman, was killed in the fighting, probably shot by one of the Hussars. The 8th Hussars had taken part in the Charge of the Light Brigade in the Crimea and now, for its gallant charge outside Gwalior, the Regiment was permitted to select four of its number to be awarded the VC. His action during the fighting at Gwalior is also referred to in the Citation for Troop Sergeant Major J Champion VC.

Selected for the Victoria Cross by their companions in the gallant charge made by a squadron of the Regiment at Gwalior, on the 17th of June, 1858, when, supported by a division of the Bombay Horse Artillery, and Her Majesty’s 95th Regiment, they routed the enemy, who were advancing against Brigadier Smith’s position, charged through the rebel camp into two batteries, capturing and bringing into their camp two of the enemy’s guns, under a heavy and converging fire from the Fort and Town. (Field Force Orders by Major-General Sir Hugh Henry Rose, G.C.B., Commanding Central India Field Force, dated Camp, Gwalior, 28th June, 1858.)