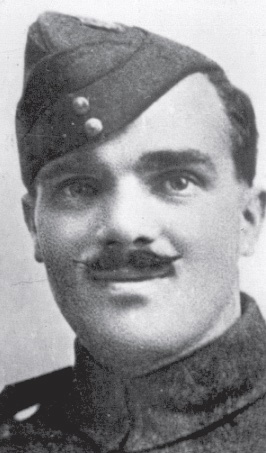 On 7 January 1917, Acting Flight Sergeant T Mottershead, No 20 Squadron, based at Clairmarais, just north-east of St Omer, and flying a two-seater FE 2d, was attacked over Ploegsteert Wood, just across the Belgian border from Armentières, by two German Albatros DIIIs. His observer, Lieutenant Gower, shot one down, but the second punctured their petrol tank and the plane caught fire. Mottershead, who was sitting just in front of the rear-mounted engine, was badly burnt. Despite this he insisted on attempting a standard landing but the undercarriage collapsed and Gower was thrown free of the crash. He led the rescue of Mottershead, who died some days later. Gower was subsequently awarded the MC.

For most conspicuous bravery, endurance and skill when, attacked at an altitude of 9,000 feet, the petrol tank was pierced and the machine set on fire. Enveloped in flames, which his observer, Lt. Gower was unable to subdue, this very gallant soldier succeeded in bringing his aeroplane back to our lines, and though he made a successful landing, the machine collapsed on touching the ground, pinning him beneath the wreckage from which he was subsequently rescued. Though suffering extreme torture from burns, Sjt. Mottershead showed the most conspicuous presence of mind in the careful selection of a landing place, and his wonderful endurance and fortitude undoubtedly saved the life of his observer. He has since succumbed to his injuries.