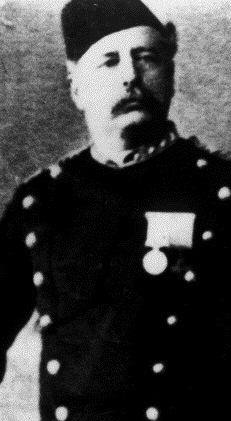 Kunwar Singh, Rajah of Jagdispur, had died of his wounds in April 1858, but a few of his supporters in West Bihar kept up the struggle against the British. On 27 September 1858, a small column under Lieutenant Turner attacked 700 of these rebel sepoys, at Suhejnee, near Peroo. The last rebels in the area were finally dispersed in November 1858.

For gallant conduct on the occasion of an attack on the rebels at Suhejnee, near Peroo, on the 27th September, 1858, which is thus described in this officer’s own words. “The enemy” (at the time supposed to have mustered from 900 to 1000 strong in infantry, with 50 cavalry,) “advanced. Without exchanging a shot, I at once retired slowly, followed up steadily by the rebel line for 100 yards clear of village or jungle, when, suddenly wheeling about my divisions into line, with a hearty cheer, we charged into and through the centre of the enemy’s line, Lieutenant Broughton, with his detachment, immediately following up the movement, with excellent effect, from his position upon the enemy’s left. The rebel right wing, of about 300 men, broke at once, but the centre and left, observing the great labour of the horses in crossing the heavy ground, stood, and receiving the charge with repeated volleys, were cut down, or broke only a few yards ahead of the cavalry. From this moment, the pursuit was limited to the strongest and best horses of the force, numbering some 60 of all ranks, who, dashing into and swimming a deep and wide nullah, followed the flying enemy through the village of Russowlee, and its sugar-cane khêts, over two miles of swamp, and 500 yards into the thick jungles near Peroo, when, both men and horses being completely exhausted, I sounded the halt and assembly, and, collecting my wounded, returned to camp at Munjhaen about 6 P.M.” The charge ended in the utter defeat of the enemy, and is referred to by Lord Clyde, “as deserving of the highest encomium, on account both of conception and execution.” It is also described as having been “as gallant as any during the war.”