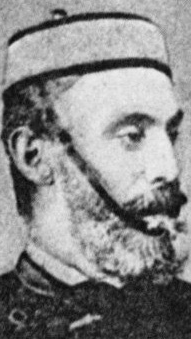 As the pacification of Oudh continued, there were a number of small-scale actions such as that at Kuthirga, in which Ensign H P Roddy distinguished himself. The remaining rebels eventually took refuge across the border in Nepal.

Major-General Sir James Hope Grant K.C.B., Commanding Oudh Force, bears testimony to the gallant conduct of Lieutenant Roddy, on several occasions. One instance is particularly mentioned. On the return from Kuthirga of the Kuppurthulla Contingent, on the 27th of September, 1858, this officer, when engaged with the enemy, charged a Rebel (armed with a percussion musket), whom the Cavalry were afraid to approach, as each time they attempted to do so, the Rebel knelt and covered his assailant; this, however, did not deter Lieutenant Roddy, who went boldly in, and when within six yards, the Rebel fired, killing Lieutenant Roddy’s horse, and before he could get disengaged from the horse, the Rebel attempted to cut him down. Lieutenant Roddy seized the Rebel until he could get at his sword, when he ran the man through the body. The Rebel turned out to be a subadar of the late 8th Native Infantry, – a powerful man, and a most determined character.