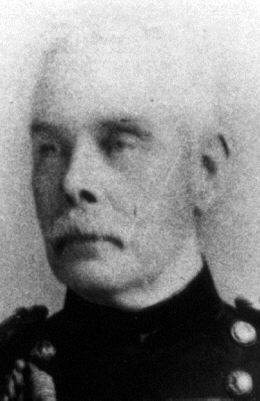 As the campaign against the Waikato Maori continued, the British pressed south to Te Awamutu. In a skirmish north of there near Ohaupo, Lieutenant Colonel J C McNeill saved the life of Private Vosper. The fall in April of a pa at Orakau, south-east of Te Awamutu, constructed and defended by Rewi Maniapoto, one of the most formidable of the Maori warriors, effectively ended the Waikato war. However hostilities now spread to other regions throughout the North Island.

For the valour and presence of mind which he displayed in New Zealand, on the 30th of March, 1864, which is thus described by Private Vosper of the Colonial Defence Force. Private Vosper states that he was sent on that day with Private Gibson, of the same Force, as an escort to Major (now Lieutenant-Colonel) McNeill, Aide-de-Camp to Lieutenant-General Sir Duncan Cameron. Lieutenant-Colonel McNeill was proceeding to Te Awamutu on duty at the time. On returning from that place, and about a mile on this side of Ohanpu, this Officer, having seen a body of the enemy in front, sent Private Gibson back to bring up Infantry from Ohanpu, and he and Private Vosper proceeded leisurely to the top of a rise to watch the enemy. Suddenly they were attacked by about 50 natives, who were concealed in the fern close at hand. Their only chance of escape was by riding for their lives, and as they turned to gallop, Private Vosper’s horse fell and threw him. The natives thereupon rushed forward to seize him, but Lieutenant-Colonel McNeill, on perceiving that Private Vosper was not following him, returned, caught his horse, and helped him to mount. The natives were firing sharply at them, and were so near that, according to Private Vosper’s statement, it was only by galloping as hard as they could that they escaped. He says that he owes his life entirely to Lieutenant-Colonel McNeill’s assistance, for he could not have caught his horse alone, and in a few minutes must have been killed.