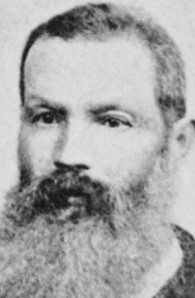 For his gallant conduct at the attack at Te Papa, Tauranga, on the 29th of April last, in entering the Pah with Commander Hay, and when that Officer was mortally wounded, bringing him out, although ordered by Commander Hay to leave him, and seek his own safety. This man was at the time ‘Captain of the Fore-top’ of the “Harrier,” doing duty as Captain’s Coxswain; and Commodore Sir William Wiseman brings his name to special notice for this act of gallantry.