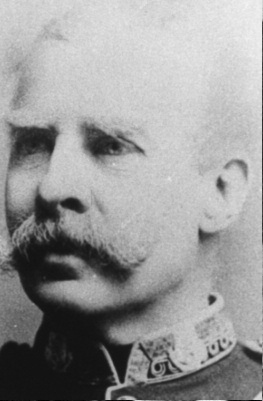 On 20 January 1865 Lieutenant General Duncan Campbell arrived at Wanganui, on the south- west coast of the North Island of New Zealand to campaign against rebellious Maori in the area and enforce the disputed purchase by the Crown of the land that formed the Waitotara Block. On 24 January over a thousand troops set out heading north-east. They camped at Nukumaru, in the middle of the Waitotara Block, fifteen miles from Wanganui. The local tribes had been inflamed by the spreading of a messianic new faith, Pai-Marire, which blended elements of the native religion with Christianity. Its followers were called Hauhaus after one of its chants. Captain H Shaw was sent out out to investigate Maori positions in the neighbouring bush. He was awarded the VC for his gallant action in the resulting skirmishes. Privates Brandon, Clampitt, Kairnes and Graham were also recommended for the VC but were awarded the DCM. The next day over 500 Maori attacked the force and were only driven off with difficulty. In September 1865 the Governor, Sir George Grey, declared the Waikato-Hauhau War, which had begun on 12 July 1863, to be at an end. Hostilities in fact continued for the rest of the decade.

For his gallant conduct at the skirmish near Nukumaru, in New Zealand, on the 24th of January last, in proceeding, under a heavy fire, with four Privates of the Regiment, who volunteered to accompany him, to within 30 yards of the bush occupied by the Rebels, in order to carry off a comrade who was badly wounded. On the afternoon of that day, Captain Shaw was ordered to occupy a position about half a mile from the Camp. He advanced in skirmishing order, and, when about 30 yards from the bush, he deemed it prudent to retire to a palisade about 60 yards from the bush, as two of his party had been wounded. Finding that one of them was unable to move, he called for volunteers to advance to the front to carry the man to the rear, and the four Privates referred to accompanied him, under a heavy fire, to the place where the wounded man was lying, and they succeeded in bringing him to the rear.