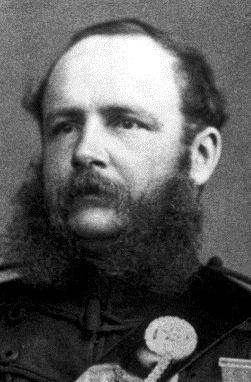 The North West Frontier had been troubled since the 1820s by a Muslim group known to the British as the ‘Hindustani Fanatics’. Originally active against the Sikhs, they began to attack the British after the annexation of the Punjab in 1849. Expeditions had been mounted against them in 1853 and 1858. The latter had driven them from their base at Sittana but they simply moved to Malka and continued with their raids. In 1863 another attempt was made to stamp them out. Brigadier General Sir Neville Chamberlain marched north with 5,000 men, intending to make the Chamla Valley his base of operations. To reach it he decided to advance through the Ambala Pass some 35 miles north-east of Nowshera held by the Bunerwals, a powerful Pathan tribe. Though the campaign was not aimed at them the Bunerwals took up arms, receiving strong moral support from a Muslim cleric, the Akhund of Swat. On 22 October 1863 a patrol led by Lieutenant Colonel Probyn VC was fired on and Chamberlain’s advance stalled. He fortified his position and for the next month fighting raged round his camp, with both sides trying to establish control over strategically important outposts such as the Crag. Chamberlain himself was severely wounded at the Crag on 20 November and command of the column passed to General John Garvock. After reinforce - ments arrived he broke out of the pass on 15 December. The Bunerwals submitted and agreed to destroy Malka themselves.

For the daring and gallant manner in which, in the course of the recent operations against the Frontier Tribes, on the 30th October, 1863, he led a party of his Regiment to re-capture the Crag Picket, after its garrison had been driven in by the enemy; on which occasion sixty of them were killed in desperate hand to hand fighting. From the nature of the approach to the top of the Crag amongst the large rocks, one or two men only could advance at one time; “and while I ascended one path,” relates Major Keyes, commanding the 1st Punjab Infantry, “I directed Lieutenant Fosbery, of the late 4th European Regiment, to push up another, at the head of a few men. He led this party with the greatest coolness and intrepidity, and was the first man to gain the top of the Crag, on his side of the attack. Lieutenant Pitcher, equally cool and daring, led a party of men up to the last rock, until he was knocked down and stunned by a large stone thrown from above, within a few yards of him.” Lieutenant Pitcher also displayed great gallantry in leading on a party of his Regiment to endeavour to recover the Crag Picket, when it again fell into the enemy’s hands, on the 13th of November, as related in the following extract from Major Keyes’ report of the 16th of that month; “The duty of leading the first charge devolved upon Lieutenant Pitcher, and I beg to bring to the special notice of the Brigadier-General Commanding, the admirable manner in which he performed this important duty. He was by many yards the foremost of his party, and the gallant bearing of this excellent young Officer was the admiration of all spectators. It is impossible to say too much, or to over-rate his services on this occasion. Lieutenant Pitcher was severely wounded, and was obliged to be carried back.