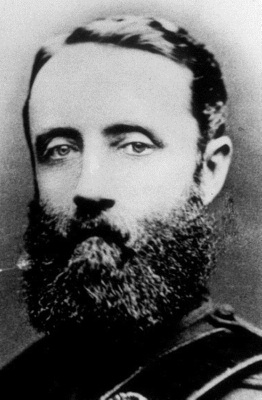 The Lushai Hills in Assam lie south of Manipur and north-east of Chittagong. The local tribes had a history of rebellion against the British and at the beginning of 1871 they rose again, attacking tea plantations near Cachar. On 23 January they killed James Winchester, a tea planter, and abducted his six-year-old daughter Mary. It took the remainder of the year to plan and assemble a punitive expedition. This was divided into two columns commanded by Brigadier General G Bourchier and Brigadier General C H Brownlow. On 3rd January 1872 one hundred men of the 2nd Goorkha Regiment, part of Brownlow’s column, joined Captain Battye at the Lalgnoora post. The next day, 4 January, 30 Gurkhas were left to guard the position while the remainder of the force set off for Lalgnoora village. For an hour they made their way along a narrow path cut into the side of the Burhee Klang mountain before marching south for another five miles down to the village. The village sat atop a steep-sided ridge and was protected by a stockade nine feet high. Battye led the attack but was amongst those injured by hidden bamboo spikes. Major D Macintyre was the first to reach and climb over the stockade, though under heavy enemy fire, immediately followed by the Gurkhas. The rapid assault took the Lushai by surprise and they soon fled. British casualties were four men killed and 11 wounded. Macintyre was awarded the VC and Rifleman Inderjeet Thappa of B Company, who was next after Macintyre into the stockade, the (Indian) Order of Merit, third class. Mary Winchester was rescued the same day and by the end of February peace was restored with the submission of all the Lushai chiefs.

For his gallant conduct at the storming of the stockaded village of Lalgnoora on the 4th January, 1872. Colonel Macpherson, C.B., V.C., Commanding the 2nd Goorkha Regiment, in which Lieutenant-Colonel Macintyre was serving at the time as second in command, reports that this Officer, who led the assault, was the first to reach the stockade (on this side from 8 to 9 feet high); and that to climb over and disappear among the flames and smoke of the burning village, was the work of a very short time. The stockade, he adds, was successfully stormed by this Officer under fire, the heaviest the Looshais delivered that day.