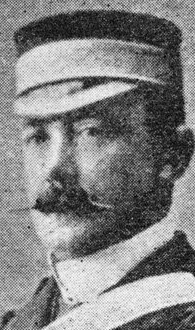 The Naga Hills in north-eastern India lie along the northern part of the border between Assam and Burma. The main town is Kohima. The various local clans, known collectively as Nagas, were a constant irritant to the British throughout the nineteenth century. Ten expeditions were mounted against them between 1832 and 1849, and eight between 1866 and 1887. A Deputy Commissioner was appointed in 1866 and some level of control imposed. In October 1879 the Deputy Commissioner at Kohima, Major G H Damant, a distinguished orientalist, was murdered by the Angami tribe at Khonoma, twelve miles west-south-west of Kohima and on 16 October Kohima itself was attacked. Reinforcements were rushed to strengthen the small garrison there and a punitive expedition organized consisting of troops from the 43rd Regiment and the 44th (Sylhet) Bengal Native Light Infantry, with two 7- pounder mountain guns. The expedition reached Khonoma on 22 November. Khonoma was a hilltop village, protected by stockades and fortified terraces. The British attacked the village on 22 November 1879 but failed to capture it. The village was abandoned that night by the Nagas, who remained active until they surrendered on 27 March 1880.

For conspicuous gallantry throughout the attack on Konoma, on the 22nd November, 1879, more especially in the final assault, when, under a heavy fire from the enemy, he rushed up to a barricade and attempted to tear down the planking surrounding it, to enable him to effect an entrance, in which act he received a very severe rifle shot wound in the left shoulder.