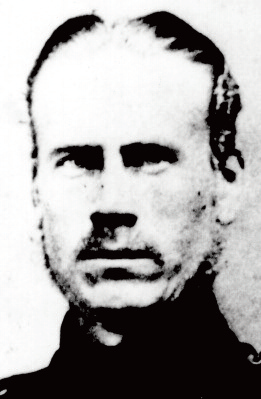 In 1866 the Fenian Brotherhood, which enjoyed strong support among Irish immigrants in the United States, attempted to advance the cause of Irish independence by mounting raids on Canada. In April it threatened to seize Campo Bello Island, just across the Canadian border with Maine. More seriously, on 31 May, about 800 Fenians crossed the Niagara river at Buffalo and occupied Fort Erie, before moving inland. They did not leave the Niagara peninsula until early July. On 7 June another group of Fenians crossed into Quebec from Vermont. On 9 June 1866 in response to this threat 95 barrels of gunpowder as well as ammunition were dispatched in secret by rail from Quebec City to Montreal, escorted by four men of the Rifle Brigade, including Private T O’Hea. The train also carried 800 German immigrants who had been locked in their carriages. When the train halted at Danville, halfway along its route, smoke was seen coming from the last carriage, which contained the armaments. Only O’Hea and his three companions realized the danger this posed to the townspeople, the Canadian infantry company which had been sent to guard the train, and to the hapless immigrants. They disconnected the carriage and O’Hea was foremost in extinguishing the fire. The chief consequence of the Fenian raids was to hasten the passing of the British North America Act in 1867, which created a united Dominion of Canada. However in the short term the raids involved a number of local skirmishes, and also necessitated units of the British army and ten thousand Canadian militiamen being placed under arms to repel the invaders.

For his courageous conduct on the occasion of a Fire which occurred in a Railway Car containing ammunition, between Quebec and Montreal, on the 9th of June last. The Serjeant in charge of the Escort states that, when at Danville Station, on the Grand Trunk Railway, the alarm was given that the Car was on fire; it was immediately disconnected, and, whilst considering what was best to be done, Private O’Hea took the keys from his hand, rushed to the Car, opened it, and called out for water and a ladder. It is stated that it was due to his example that the fire was suppressed.