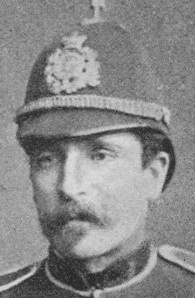 In January 1864 Emperor Theodore II of Abyssinia, offended by the failure of the British government to reply to his proposal of an alliance against the neighbouring Muslim powers, imprisoned and tortured Captain Charles Cameron, the British Consul at his court. When news of this reached London the Foreign Office wrote requesting the Consul’s release. Hormuzd Rassam, a Turkish Assyriologist, who delivered the letter in January 1866, was himself imprisoned by the Emperor and in September 1867 the British sent Theodore a final ultimatum, threatening war. Once it had become clear that the prisoners were not going to be freed, an expedition consisting of 13,000 British and Indian troops under General Sir Robert Napier was sent from Bombay. It landed at Malkatto, just south of Massawa on the Red Sea coast. Napier, who himself arrived on 2 January 1868, organized his army in two divisions. The first and smaller was the 5,000-man striking force; the second was responsible for maintaining the long line of communications between the coast and Theodore’s stronghold at Magdala, which lay about 300 miles to the south. By early April 1868 Napier was within reach of his goal. Magdala is situated high above the Arogee plateau and the road to it lay between Mounts Fahla and Selassie, then along the flank of Islamgie. On 10 April Theodore’s troops on Mount Fahla attacked Napier’s baggage train as it moved across the plateau. The Abyssinians were armed chiefly with double-barrelled muskets and lost 700 dead and 1,200 wounded, as opposed to two British dead and twenty wounded. Theodore at once released his prisoners and retreated into the fortress of Magdala. This sat atop a three hundred foot-high ridge with a sheer drop on three sides. On 13 April the 33rd Foot, assisted by the Royal Engineers, stormed the stronghold. The sappers were unable to open the main gates and the 33rd began to move along the foot of the walls. Private J Bergin sought to scale them by climbing up on the shoulders of Drummer M Magner but was too heavy for him, so they reversed position and the drummer boy was able to climb in and then help Bergin up. Their companions quickly followed. All resistance soon ceased and, rather than be taken prisoner, Theodore shot himself.

For their conspicuous gallantry in the assault of Magdala on the 13th of April last. Lieutenant-General Lord Napier reports that, whilst the head of the column of attack was checked by the obstacles at the gate, a small stream of Officers and men of the 33rd Regiment, and an Officer of Engineers, breaking away from the main approach to Magdala, and climbing up a cliff, reached the defences, and forced their way over the wall, and through a strong and thorny fence, thus turning the defenders of the gateway. The first two men to enter, and the first in Magdala, were Drummer Magner and Private Bergin, of the 33rd Regiment.