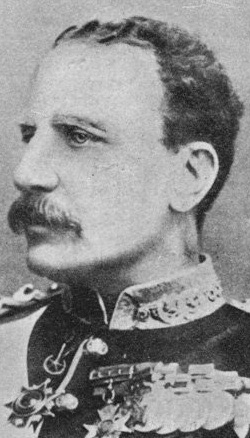 More details about: THE ASHANTI WAR

The Gaika-Galeka War was the ninth and last of a series of Frontier Wars between Europeans and the Xhosa people of southern Africa. Until its outbreak the eastern boundary of Cape Colony was the Kei river. Settled along it were the Fingo people, who had sought British protection in 1835. Across the river were their former masters the Galekas under their Chief, Kreli. In 1877 what began as an argument at a wedding developed into all-out war between the two tribes. Meanwhile, encouraged by the Galekas, the Gaikas rose in rebellion against the British. In December 1877 at the request of Sir Bartle Frere, Governor of the Cape, General Sir A T Cunynghame the British Commander in South Africa, ordered Lieutenant Colonel Richard Glyn of the 1st Battalion 24th (2nd Warwickshire) Regiment across the Kei river into Galeka territory. On 7 February 1878 Glyn destroyed a large Galeka force at Kentani. Meanwhile Cunynghame was replaced by Lord Chelmsford. The 88th Regiment, the Connaught Rangers, together with local forces had been conducting limited operations to protect settlers and Chelmsford now supervised their reduction of the Gaikas. After the Gaikas’ Chief, Sandile, died of wounds on 1 June 1878 resistance ceased. Kreli was exiled and the Transkei annexed.

For his gallant conduct in risking his own life in endeavouring to save the life of Private Giese, of the Frontier Armed Mounted Police, on the occasion of the action with the Gaikas near Komgha, on the 29th December, 1877. It is reported that when a small body of Mounted Police were forced to retire before overwhelming numbers of the enemy, Major Moore observed that Private Giese was unable to mount his horse, and was thereby left at the mercy of the Kaffirs. Perceiving the man’s danger, Major Moore rode back alone into the midst of the enemy and did not desist in his endeavour to save the man until the latter was killed, Major Moore having shot two Kaffirs and received an assegai wound in the arm during his gallant attempt.