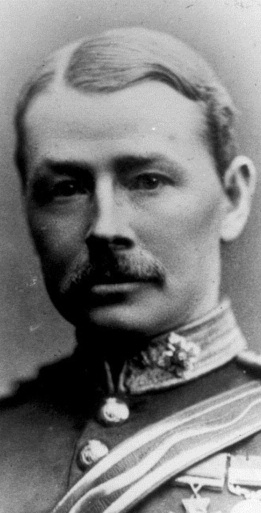 By March 1879 General Sir S J Browne VC had reached Jellalabad, roughly half way between Peshawar and Kabul, but his lines of communication with Peshawar were under constant threat from Afridis, Khugianis and Shinwaris. As part of his countermeasures Captain E P Leach was sent to survey the region round Maidanak, which lay 14 miles south-west of Basawal and fifty miles east of Jellalabad on the road from the Khyber Pass. Leach had with him 50 men from the Guides Cavalry under Lieutenant W R P Hamilton VC and 100 from the 45th Sikhs under Lieutenant Barclay. They were attacked on 17 March and a few days later Brigadier General J A Tytler VC carried out a punitive strike against Maidanak and completed Leach’s survey.

For having, in action with the Shinwarris near Maidanah, Afghanistan, on the 17th March, 1879, when covering the retirement of the Survey Escort who were carrying Lieutenant Barclay, 45th Sikhs, mortally wounded, behaved with the utmost gallantry in charging, with some men of the 45th Sikhs, a very much larger number of the enemy. In this encounter Captain Leach killed two or three of the enemy himself, and he received a severe wound from an Afghan knife in the left arm. Captain Leach’s determination and gallantry in this affair, in attacking and driving back the enemy from the last position, saved the whole party from annihilation.