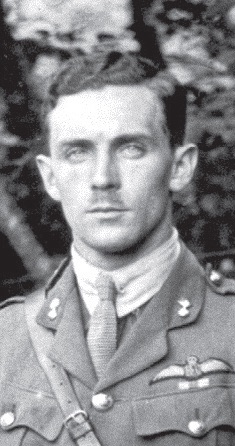 On 10 August 1918, the third day of the Battle of Amiens, the Allies hoped to advance to a line running north from Roye, on the Amiens-Soissons road, through Chaulnes and Bray to Dernancourt, just south of Albert. However, German resistance was stiffening, and none of these goals was to be achieved until the German army withdrew at the end of the month. On 10 August 1918, Captain F M F West, in an Armstrong F8 with his observer Lieutenant John Haslam, was on a reconnaissance patrol north-east of Roye when he spotted German troops massing for a counter-attack. He was then set upon by German planes but, despite the fact that his left leg had been almost severed by bullets, managed to make it back to base to make his report. The injured leg was subsequently amputated.

Captain West, while engaging hostile troops at a low altitude far over the enemy lines, was attacked by seven aircraft. Early in the engagement one of his legs was partially severed by an explosive bullet, and fell powerless into the controls, rendering the machine for the time unmanageable. Lifting his disabled leg, he regained control of the machine, and, although wounded in the other leg, he, with surpassing bravery and devotion to duty, manoeuvred his machine so skilfully that his observer was enabled to get several good bursts into the enemy machines, which drove them away. Captain West, then, with rare courage and determination, desperately wounded as he was, brought his machine over our lines and landed safely. Exhausted by his exertions, he fainted, but on regaining consciousness insisted on writing his report. (The award of the Military Cross was gazetted on 26th July, 1918.)