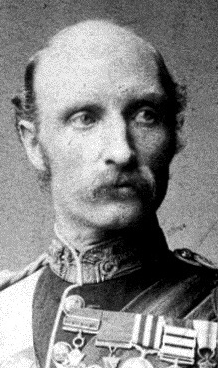 Sher Ali, the old Amir of Afghanistan, had died at Mazar-i-Sharif on 21 February 1879 on his way to Tashkent, hoping to secure Russian aid. His successor was his son Yakub Khan. On 26 May 1879 he signed the Treaty of Gandamak with the British, bringing to an end the first phase of the Second Afghan War. The Treaty accepted British control over Afghan foreign affairs and the establishment of a British Envoy at Kabul. It also abandoned Afghan claims to the Khyber Pass and agreed to British control of the Kurram Valley and other border areas. These territorial concessions were deeply resented in Afghanistan and on 3 September the new British minister Sir Louis Cavagnari with all his staff and military escort including Lieutenant W R P Hamilton VC were murdered at Kabul by mutinous soldiers. Major General F S Roberts VC was ordered back to Afghanistan from Simla and by 28 September he was at Kushi only 44 miles south of the capital. Here he was met by the Amir, Yakub Khan. Unwilling to deliver Afghanistan to the British but unable to drive them out, the Amir abdicated, leaving the country without an effective government. On 6 October 1879 Roberts reached Charasia, only five miles north of Kabul. There were two possible routes to the capital, one along the valley of the Kabul river and the other the valley of the Logar river. The Afghan defenders of the capital had taken up their position on the range of hills between them. Though Roberts with a force of only 3,800 men found himself vastly outnumbered, he ordered Brigadier General T Baker to attack. Baker led the advance on the left, deputing to Major G S White the assault on the right and the capture of the Sang-i- Nawishta, the gorge of the Logar, the entrance to which was guarded by a conical hill. White himself led two companies of the Gordon Highlanders in the successful attack on this position. White was then able not only to advance but to send two companies to assist Baker. By 5pm the British had driven the Afghans from all their positions and were able to advance to camp in front of Kabul. After some days spent in operations against Afghan forces in the neighbour - hood of the capital, the British formally took possession of the city on 13 October 1879.

For conspicuous bravery during the engagement at Charasiah on the 6th October, 1879, when, finding that the artillery and rifle fire failed to dislodge the enemy from a fortified hill which it was necessary to capture, Major White led an attack on it in person. Advancing with two companies of his regiment, and climbing from one steep ledge to another, he came upon a body of the enemy, strongly posted, and outnumbering his force by about 8 to 1. His men being much exhausted, and immediate action being necessary, Major White took a rifle, and, going on by himself shot the leader of the enemy. This act so intimidated the rest that they fled round the side of the hill, and the position was won. Again, on the 1st September, 1880, at the Battle of Candahar, Major White, in leading the final charge, under a heavy fire from the enemy, who held a strong position and were supported by two guns, rode straight up to within a few yards of them, and seeing the guns, dashed forward and secured one, immediately after which the enemy retired.