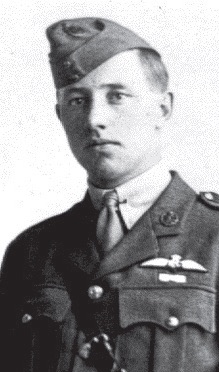 The advance of Third and Fourth Armies eastwards from the River Selle brought them to the Forêt de Mormal, east of Englefontaine between Le Quesnoy and Landrecies.

On the morning of the 27th October, 1918, this officer observed an enemy two-seater over the Fôret de Mormal. He attacked this machine, and after a short burst it broke up in the air. At the same time a Fokker biplane attacked him, and he was wounded in the right thigh, but managed, despite this, to shoot down the enemy aeroplane in flames. He then found himself in the middle of a large formation of Fokkers, who attacked him from all directions, and was again wounded in the left thigh, but succeeded in driving down two of the enemy in a spin. He lost consciousness after this, and his machine fell out of control. On recovery he found himself being again attacked heavily by a large formation, and singling out one machine, he deliberately charged and drove it down in flames. During this fight his left elbow was shattered and he again fainted, and on regaining consciousness he found himself still being attacked, but, notwithstanding that he was now severely wounded in both legs and his left arm shattered, he dived on the nearest machine and shot it down in flames. Being greatly exhausted, he dived out of the fight to regain our lines, but was met by another formation, which attacked and endeavoured to cut him off, but after a hard fight he succeeded in breaking up this formation and reached our lines, where he crashed on landing. This combat, in which Major Barker destroyed four enemy machines (three of them in flames), brought his total successes up to fifty enemy machines destroyed, and is a notable example of the exceptional bravery and disregard of danger which this very gallant officer has always displayed throughout his distinguished career. Major Barker was awarded the Military Cross on 10th January, 1917; first Bar on 18th July, 1917; the Distinguished Service Order on 18th February, 1918; second Bar to Military Cross on 16th September, 1918; and Bar to Distinguished Service Order on 2nd November, 1918.