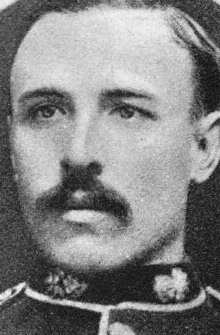 After the defeat at Maiwand the British garrison at Kandahar withdrew behind the city’s defensive walls. Ayub Khan’s army arrived on 6 August 1880 and the city was effectively under siege for the next three weeks. On 13 August the enemy occupied the village of Deh Khoja, just to the east. To forestall an attack from this quarter against a weak portion of the city’s defences Major General J Primrose sanctioned a combined cavalry and infantry action against the village. This began at 4.30am on 16 August, with a preliminary artillery bombardment which only succeeded in alerting the enemy. Though Brigadier General H F Brooke was able to advance through Deh Khoja his troops faced a strong enemy force and Primrose ordered him to retire. Brooke himself was killed and total British losses were 99 dead and 109 wounded. Although a costly failure, the action nevertheless unnerved Ayub Khan. He failed to press home his advantage and on 24 August raised his siege of the city but remained encamped a couple of miles to the north-west on the Argandab river. On 31 August Major General Roberts, who had set out from Kabul on 8 August, arrived at Kandahar with 10,000 men. The next day he attacked the Afghans who made a desperate stand at Baba Wali Kotal outside Kandahar, where their artillery was positioned. The British totally destroyed Ayub Khan’s army in what was the last major action of the campaign. The final charge in the battle was led by Major G S White, 92nd Regiment, and was the second action referred to in his VC Citation. In April 1881 the British evacuated Kandahar and in handing the city over to the new Amir Abdur Rahman signalled the end of the Second Afghan War.

For conspicuous gallantry on the occasion of the sortie from Kandahar, on the 16th August, 1880, against the village of Deh Khoja, in having rescued and carried for a distance of over 200 yards, under the fire of the enemy, a wounded soldier, Private Massey, of the Royal Fusiliers, who had taken shelter in a blockhouse. Several times they were compelled to rest, but they persevered in bringing him to a place of safety. Private Ashford rendered Lieutenant Chase every assistance, and remained with him throughout.