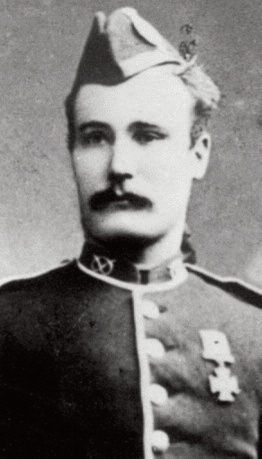 On 11 January 1879, British Forces under Lieutenant General Lord Chelmsford invaded Zululand. The army comprised three sections. Colonel Evelyn Wood VC commanded a northern column and Colonel C K Pearson a coastal column. Chelmsford himself accompanied the central column, commanded by Colonel Richard Glyn, which crossed the Buffalo river at Rorke’s Drift. He was aiming for the Zulu royal kraal at Ulundi. On 20 January, after some preliminary fighting, this column reached Isandhlwana mountain, ten miles from Rorke’s Drift, and pitched camp at its base. In what proved to be a fatal miscalculation, no defences were erected round the camp. Receiving news that the Zulu army was approaching, on 21 January Chelmsford sent out Major Dartnell eastwards, in the direction of Ulundi, on reconnaissance. At dawn the following morning Chelmsford himself set out with half his force to join in the search. Lieutenant Colonel Henry Pulleine was left with 1,200 men to guard the camp, mostly drawn from the 24th (2nd Warwickshire) Regiment. Unknown to the British, the Zulus, 25,000 strong, were hidden in the Ngwebeni Valley, five and a half miles north-east of Isandhlwana. They now emerged and, despite a desperate defence by the British, overwhelmed and destroyed the camp. Most of the defenders, including Pulleine, were killed. The track back to Rorke’s Drift had been cut by the Zulu army and the few British who were able to escape were closely pursued by the Zulus and forced to take a more southerly route to the Buffalo river, five miles away, at a place now known as Fugitives’ Drift. Private S Wassall was awarded the VC for his gallantry in rescuing a drowning soldier during the retreat. Victorian Britain was shocked by the disaster at Isandhlwana but took inspiration from the actions of Lieutenants T Melvill and N J A Coghill. It was widely believed that when Colonel Pulleine realized the position was hopeless, he had ordered his Adjutant, Lieutenant Melvill, to save the Queen’s Colour of the 1st Battalion, 24th Regiment. At some point Melvill was joined by Lieutenant Coghill, who had earlier been wounded in the leg. The Buffalo river was in flood. Coghill forded it but rode back in to rescue Melvill, who had lost his horse and was clinging to a rock. He succeeded but lost his own horse in the process, while the Colour itself was swept away by the river. Unfortunately, Zulus had also crossed the river and both Melvill and Coghill were killed on the far bank. On 4 February 1879 Melvill and Coghill were buried by a party under the command of Major Wilson Black, of the 2/24th. The Queen’s Colour was found in the Buffalo river and restored to the 1st Battalion. Two months later the bodies were reburied a few yards from the spot where the men had fallen. The Governor, Sir Bartle Frere, presented a memorial cross which still marks the grave today. Lord Chelmsford’s despatch containing an account of saving the Colour was published in The London Gazette of 4 April 1879. On 2 May 1879 The London Gazette contained a Memorandum entry for Lieutenants Melvill and Coghill, stating that they would have been recommended for VCs had they survived. In due course the award of a number of posthumous VCs following the Boer War of 1899-1902 prompted an official review of the six previous Memorandum cases. On 15 January 1907, King Edward VII approved the award of posthumous VCs to all six, including Lieutenants Melvill and Coghill.

For his gallant conduct in having, at the imminent risk of his own life, saved that of Private Westwood, of the same regiment. On the 22nd January, 1879, when the Camp at Isandhlwana was taken by the enemy, Private Wassall retreated towards the Buffalo River, in which he saw a comrade struggling, and apparently drowning. He rode to the bank, dismounted, leaving his horse on the Zulu side, rescued the man from the stream, and again mounted his horse, dragging Private Westwood across the river under a heavy shower of bullets.