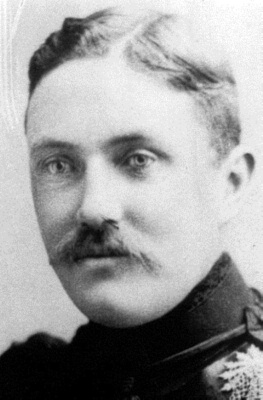 On the 28th March, 1879, during the assault of the Inhlobane Mountain, Sir Evelyn Wood ordered the dislodgment of certain Zulus (who were causing the Troops much loss) from strong natural caves commanding the position in which some of the wounded were lying. Some delay occurring in the execution of the orders issued, Captain the Honourable Ronald Campbell, Coldstream Guards, followed by Lieutenant Lysons, Aide-de-Camp, and Private Fowler, ran forward in the most determined manner, and advanced over a mass of fallen boulders, and between walls of rock, which led to a cave in which the enemy lay hidden. It being impossible for two men to walk abreast, the assailants were consequently obliged to keep in single file, and as Captain Campbell was leading, he arrived first at the mouth of the cave, from which the Zulus were firing, and there met his death. Lieutenant Lysons and Private Fowler, who were following close behind him, immediately dashed at the cave, from which led several subterranean passages, and firing into the chasm below, succeeded in forcing the occupants to forsake their stronghold. Lieutenant Lysons remained at the cave’s mouth for some minutes after the attack, during which time Captain Campbell’s body was carried down the slopes.