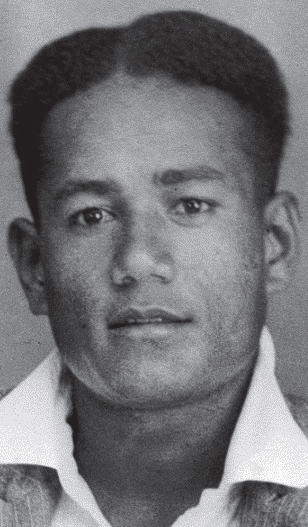 The Solomon Islands are east of New Guinea and south-east of New Britain. Bougainville Island, at the north of the group had been occupied by the Japanese in 1942 but, after the Japanese defeat at Guadalcanal in the South Solomons, the Americans had established a bridgehead there in November 1943. By 1944 the Japanese force on Bougainville, approximately 50,000 men, was effectively cut off but fighting continued there until the end of the war. Mawaraka is close to Empress Augusta Bay, half way down the west coast of the island.

On June 23rd, 1944, at Mawaraka, Bougainville, in the Solomon Islands, Corporal Sefanaia Sukanaivalu crawled forward to rescue some men who had been wounded when their platoon was ambushed and some of the leading elements had become casualties. After two wounded men had been successfully recovered this N.C.O., who was in command of the rear section, volunteered to go on farther alone to try and rescue another one, in spite of machine gun and mortar fire, but on the way back he himself was seriously wounded in the groin and thighs and fell to the ground, unable to move any farther. Several attempts were then made to rescue Corporal Sukanaivalu but without success owing to heavy fire being encountered on each occasion and further casualties were caused. This gallant N.C.O. then called to his men not to try and get to him as he was in a very exposed position, but they replied that they would never leave him to fall alive into the hands of the enemy. Realising that his men would not withdraw as long as they could see that he was still alive and knowing that they were themselves all in danger of being killed or captured as long as they remained where they were, Corporal Sukanaivalu, well aware of the consequences, raised himself up in front of the Japanese machine gun and was riddled with bullets. This brave Fiji soldier, after rescuing two wounded men with the greatest heroism and being gravely wounded himself, deliberately sacrificed his own life because he knew that it was the only way in which the remainder of his platoon could be induced to retire from a situation in which they must have been annihilated had they not withdrawn.