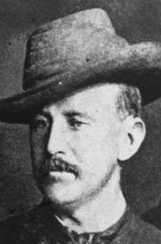 For his gallant conduct on the 3rd July, 1879, during the reconnaissance made before Ulundi by the Mounted Corps, in endeavouring to rescue Trooper Raubenheim, from the Frontier Light Horse, who fell from his horse as the troops were retiring. Captain D’Arcy, though the Zulus were quite close upon them, waited for the man to mount behind him; the horse kicked them both off, and though much hurt by the fall and quite alone, Captain D’Arcy coolly endeavoured to lift the trooper, who was stunned, on to the horse, and it was only when he found that he had not strength to do so that he mounted and rode off. His escape was miraculous as the Zulus had actually closed upon him.