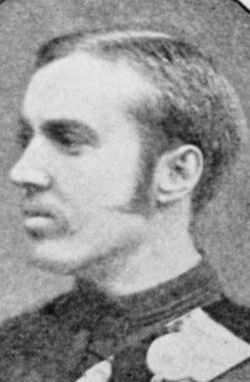 Basutoland (now Lesotho) had been annexed by the Crown in 1868 following an appeal by its Paramount Chief, Moshoeshoe I, for assistance against the Orange Free State. In 1871 its Administration had been transferred to the Cape Colony. The first outbreak of unrest there involved the Baphuti Chief, Morosi, a vassal of Moshoeshoe. The Baphuti had been granted territory by Moshoeshoe south of the Orange river. Following his defeat by the Boers of the Orange Free State, their chief Morosi had in the 1860s established his stronghold there on the mountain which bears his name. Over a thousand feet high, its flanks were precipitous and it was almost impregnable, except to the south-east, where the approaches to the summit were guarded by a series of stone walls (schanzes). In November 1878 John Austen, the magistrate at Quthing, arrested one of Morosi’s sons wars of empire • 415 The Victoria Cross George Cross pages 04/10/2013 10:41 Page 415 for horse theft. He was sentenced to hard labour at the Cape but was freed by the Baphuti. Colonel C D Griffith, the Cape Government’s agent in Basutoland, assembled a punitive expedition of a thousand men, which on 25 March 1879 began the siege of Morosi’s Mountain, where the Chief and 1,500 of his warriors had taken refuge. On 8 April, after a preliminary bombardment, Captain Grant led a force of 39 Cape Mounted Riflemen and 100 Cape Mounted Yeomanry in an unsuccessful assault on the schanzes.

For conspicuous gallantry and devotion during an attack on Moirosi’s Mountain, on the 8th April, 1879, in volunteering to throw time fuze shells, as hand grenades, over a line of stone barricades, from behind which, the enemy were bringing a heavy fire to bear on the Colonial Troops, and which it was impossible effectually to return. After causing all the men of his party to retire under cover, lest the shell burst prematurely,- by which precaution many lives were in all probability saved,- Sergeant Scott advanced in the most deliberate manner under a heavy fire, and, having got under the wall, made two attempts to throw shells over it. At the second attempt, owing to some defect in the fuze, which he had just lighted, the shell exploded almost in Sergeant Scott’s hands, blowing his right hand to pieces, and wounding him severely in the left leg.