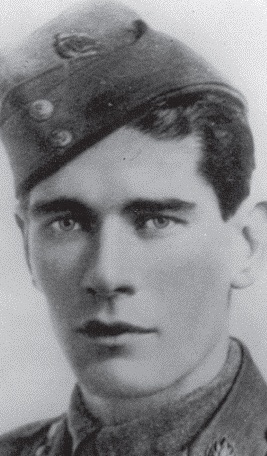 Over north-eastern France and Flanders

Acting Major E Mannock, No 85 Squadron, Royal Air Force, was one of the most distinguished British airmen of the Great War, credited with 73 combat victories. He had managed to secure both a commission and a pilot’s licence despite defective eyesight. On 26 July 1918, while accompanying Lieutenant Donald Inglis on his first mission against the enemy, he was shot down by enemy ground fire over German lines and killed. Such was the respect in which he had been held that many who had served under him lobbied for his gallantry to be recognized and, partly due to the support of Winston Churchill, then Secretary of State for Air, the award of a VC was gazetted a year after his death.

His Majesty the KING has been graciously pleased to approve of the award of the Victoria Cross to the late Captain (acting Major) Edward Mannock, D.S.O., M.C., 85th Squadron Royal Air Force, in recognition of bravery of the first order in Aerial Combat:– On the 17th June, 1918, he attacked a Halberstadt machine near Armentieres and destroyed it from a height of 8,000 feet. On the 7th July, 1918, near Doulieu, he attacked and destroyed one Fokker (red-bodied) machine, which went vertically into the ground from a height of 1,500 feet. Shortly afterwards he ascended 1,000 feet and attacked another Fokker biplane, firing 60 rounds into it, which produced an immediate spin, resulting, it is believed, in a crash. On the 14th July, 1918, near Merville, he attacked and crashed a Fokker from 7,000 feet, and brought a two-seater down damaged. On the 19th July, 1918, near Merville, he fired 80 rounds into an Albatross two-seater, which went to the ground in flames. On the 20th July, 1918, East of La Bassee, he attacked and crashed an enemy two-seater from a height of 10,000 feet. About an hour afterwards he attacked at 8,000 feet a Fokker biplane near Steenwercke and drove it down out of control, emitting smoke. On the 22nd July, 1918, near Armentieres, he destroyed an enemy triplane from a height of 10,000 feet. Major Mannock was awarded the undermentioned distinctions for his previous combats in the air in France and Flanders:- Military Cross. Gazetted 17th September, 1917. Bar to Military Cross. Gazetted 18th October, 1917. Distinguished Service Order. Gazetted 16th September, 1918. Bar to Distinguished Service Order (1st). Gazetted 16th September, 1918. Bar to Distinguished Service Order (2nd). Gazetted 3rd August, 1918. This highly distinguished officer, during the whole of his career in the Royal Air Force, was an outstanding example of fearless courage, remarkable skill, devotion to duty and selfsacrifice, which has never been surpassed. The total number of machines definitely accounted for by Major Mannock up to the date of his death in France (26th July, 1918) is fifty – the total specified in the Gazette of 3rd August, 1918, was incorrectly given as 48, instead of 41.