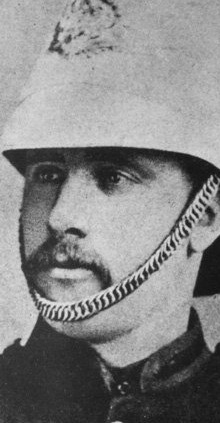 In the few days after the British bombardment of Alexandria on 11 July 1882, Admiral Sir Beauchamp Seymour landed a small force to try to maintain order in the city. Fearing a further British advance, the Egyptian Minister of War, Arabi Pasha, established defensive lines at Kafr Dowar, a strategic position 15 miles south-east of the city on the railway to Cairo and also commanding the Mahmoudieh Canal, which supplied the city with fresh water. On 5 August 1882 Major General Sir Archibald Alison probed the position with 800 infantry and eighty mounted infantry. British casualties were four dead and twenty-seven wounded.

During the reconnaissance upon Kafr Dowar, on 5th August, 1882, the Mounted Infantry, with which Private Corbett was serving, came under a hot fire from the enemy and suffered some loss, including Lieutenant Howard-Vyse, mortally wounded. This officer fell in the open, and there being no time to move him, Private Corbett asked and obtained permission to remain by him, and though under a constant fire, he sat down and endeavoured to stop the bleeding of this officer’s wounds, until the Mounted Infantry received orders to retire, when he rendered valuable assistance in carrying him off the field.