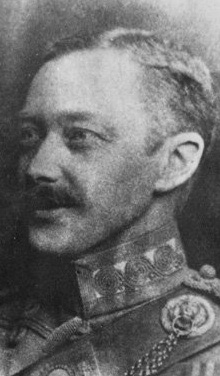 The state of Manipur lay between Assam in the west and Burma in the east. Its capital was Imphal, sometimes also known as Manipur. A British Resident had first been appointed in 1835 and the state had long supplied the British with troops. In 1890 its Maharaja, Surchandra Singh, had been overthrown by his brothers in a Palace revolution and had taken refuge in Calcutta, where he petitioned vainly to be restored to his throne. While the British were prepared to recognize his brother Kullachandra as ruler, they believed that another brother, Tikendrajit, who was Senapati (head of the army) and had been a driving force behind the coup, needed to be removed from the state if order were to be restored. James Quinton, the Chief Commissioner of Assam, with an escort of 400 men under Lieutenant Colonel Charles Skene, arrived at Imphal on 22 March 1891 to carry out this policy. Attempts to arrest theSenapati failed. On 24 March his house was surrounded and in the subsequent fighting Lieutenant Brackenbury was killed. When the house was taken, Tikendrajit was not in it. At 8pm Frank Grimwood, the Resident, arranged an armistice. He, Quinton, Skene and two other officers set off for the fort to meet with the Senapati but were never seen again and had in fact been killed. In the middle of the night the Residence came under fire and the British force immediately withdrew from Imphal. On 28 March Lieutenant C J W Grant set off from Tamu in Burma, 40 miles south-east of Imphal, with a force of eighty men to attempt to rescue the missing men. On 30 March at Thobal, fifteen miles short of their destination, they found a large force of Manipuris blocking the river crossing. Grant, though wounded, managed to get his men across and took up a defensive position, which he maintained for the next ten days under determined attack by a force of 2,000 Manipuris. On 9 April Grant received orders to withdraw and returned to Tamu. He was awarded the VC for his gallantry and all of his surviving men received the (Indian) Order of Merit. A Gurkha Officer, Jemadar Birbal Nagarkoti, was awarded the Order of British India. A punitive expedition was immediately organized. Only the column coming from Tamu met significant resistance, defeating a Manipuri force at Khongjom on 25 April 1891. Imphal itself was occupied on the 27th. The British placed Churachandra Singh, a five-year-old member of a junior branch of the ruling family, on the throne. Tikendrajit, who is now regarded as a Manipuri state hero, was captured and hanged on 13 August 1891. It was in this area during the Second World War, at Imphal and Kohima, that the Japanese incursion from Burma into India was defeated.

For conspicuous bravery and devotion to his country displayed by him in having, upon hearing on the 27th March, 1891, of the disaster at Manipur, at once volunteered to attempt the relief of the British Captives, with 80 Native Soldiers, and having advanced with the greatest intrepidity, captured Thobal, near Manipur, and held it against a large force of the enemy. Lieutenant Grant inspired his men with equal heroism, by an ever-present example of personal daring and resource.