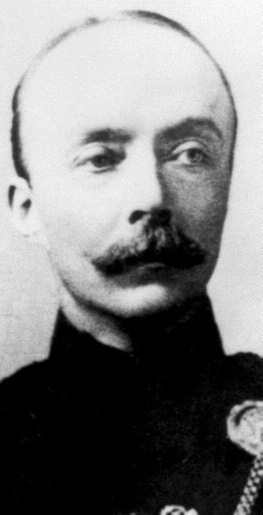 The state of Hunza, north of Gilgit, occupied a strategically important position just south of the Pamirs, where the British, Chinese and Russian empires converged. Technically, it was a dependency of the Maharajah of Kashmir, himself a feudatory of the British, but it also paid tribute to the Emperor of China. It had however entertained Russian agents, and the British government feared it might provide a gateway for Russian expansion south of the Pamirs. In 1888 its ruler, the Mir Safdar Ali, in alliance with Nagar, had temporarily expelled Kashmiri garrisons from Chaprot and Chalt. In 1889 the Indian government installed Colonel Algernon Durand, brother of Sir Mortimer Durand, Foreign Secretary to the Indian Government, as political officer at Gilgit. In November 1891 he informed the rulers of Hunza and Nagar that it had been decided to build a road north from Gilgit through Chalt to Hunza and Nagar to give the British access to the Pamirs. Both states took up arms to oppose this. Durand had set out from Gilgit on 16 November 1891 with 200 men of the 5th Gurkha Rifles under Lieutenant G H Boisragon, some artillery and Kashmiri infantry, and 12 men of the 4th Company Bengal Sappers and Miners under Captain F J Aylmer, RE. On 2 December he reached Nilt on the Nagari side of the Hunza river. The fort sat on a high ridge above the river, protected by precipices and twenty foot high walls. After the British artillery proved ineffective it was decided to blow up the main gate of the fort. Lieutenants Boisragon and Badcock led 100 men of the 5th Gurkhas, under heavy fire, to clear a path through the abattis which protected the fort walls. Captain Aylmer and Sapper Hazara Singh then rushed forward and placed explosives by the main gate but the fuse failed to detonate. Aylmer, who had been shot in the leg, returned and reset it, despite being further wounded when his right hand was crushed by a stone thrown from the battlements. The resulting explosion destroyed the gate and Aylmer, Boisragon and Badcock with six of their men rushed into the fort. For a time they were unsupported as the main British force was still fighting its way through the abattis.Boisragon raced back to find his Gurkhas and led them into the fort, which eventually fell after bitter hand-to-hand fighting. During the action Aylmer had fainted from loss of blood and was rescued by Sapper Abdulla Khan. Aylmer and Boisragon were awarded the VC for their gallantry in the action, Badcock the DSO, and Abdulla Khan and Hazara Singh the (Indian) Order of Merit. .

For his conspicuous bravery in the assault and capture of the Nilt Fort on 2nd December, 1891. This Officer led the assault with dash and determination, and forced his way through difficult obstacles to the inner gate, when he returned for reinforcements, moving intrepidly to and fro under a heavy cross-fire until he had collected sufficient men to relieve the hardly pressed storming party and drive the enemy from the fort.