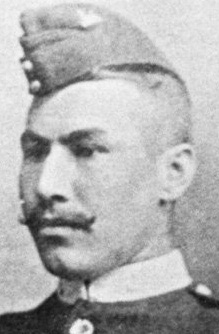 Towards the end of August 1897 the Pathan Revolt spread to the Afridis and on 23 August the British lost control of the Khyber Pass, not regaining it until December. In September the Orakzais attacked British positions on the Samana Range. Between them the tribes could field almost 50,000 men. That same month Lieutenant General Sir William Lockhart was given command of a Field Force of over 10,000 British and 20,000 native troops to march into Tirah, south-west of Peshawar, and bring the two tribes to heel. His advance guard left Kohat on 11 October to cross the Samana Range into Tirah by way of the Chagru Kotal. This pass was dominated by the Dargai Heights which had been scaled by the British on 18 October but not occupied. This proved a costly miscalculation and by the time the British came to reoccupy them on the 20th, they were in the hands of over ten thousand hostile tribesmen. A battalion of Gurkhas and two companies of the Dorsetshire Regiment were pinned down while attempting to cross the exposed ground to the base of the Heights. Another company of Dorsets and a company of the Derbyshire Regiment had little more success. It was the Gordon Highlanders and the 3rd Sikhs who eventually took the position. On being ordered to advance and clear the ridge the Gordon Highlanders moved forward at 2.30pm but suffered heavy losses. The first line reached the shelter of some rocks, where Piper G F Findlater, though shot through both feet and unable to stand, propped himself against a boulder and continued to play the regimental march, Cock o’ The North. Inspired by the tune and the urgings of their officers, about 400 men ran up the path leading to the crest and took the Heights. The Colonel of the Gordon Highlanders, Lieutenant Colonel Mathias, was also recommended by Brigadier General Kempster for a VC for leading the final assault but this was turned down by the C-in-C India. Instead, Mathias was promoted to Brevet Colonel and appointed ADC to the Queen. With the route into Tirah secure, Sir William Lockhart marched through its five chief valleys, skirmishing and destroying villages. It was during the withdrawal of Brigadier General Kempster’s column from the Waran Valley on 16 November 1897 that Private Vickery again distinguished himself. He and Private Harris were separated from their company, Vickery limping from a sword-cut to the foot. They were attacked as they retreated down a steep nullah where Vickery fought off and killed three of the enemy. He and Harris took refuge in a village for the night before returning to camp the following morning. Lockhart finally left Tirah in December, when winter set in, but made it clear he would return if the tribes did not submit. By April 1898 most of the tribesmen had done so.

During the attack on the Dargai Heights on the 20th October, 1897, Private Vickery ran down the slope and rescued a wounded comrade under a heavy fire, bringing him back to cover. He subsequently distinguished himself with Brigadier-General Kempster’s Column in the Waran Valley, killing three of the enemy who attacked him when separated from his Company.