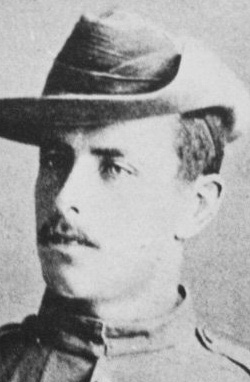 The British South Africa Company had administered Mashonaland since 1890 and Matabeleland since 1893, when it had defeated the last Matabele King, Lobengula. European expansion was spurred on by mineral prospecting and brought agricultural settlers in its wake and the British assumed that most Matabele were pleased to be free of what they saw as the King’s despotic tyranny. Though there were secondary factors, including heavy taxation and the loss of their cattle in a rinderpest epidemic, the Matabele were in fact, biding their time to be rid of the new British presence. They did not have to wait long for an opportunity. At the end of December 1895 Dr L S Jameson, the Administrator of Matabeleland, had invaded theTransvaal with a force which included many British South Africa Company Police. On 2 January 1896 these had surrendered to the Boers which appeared to leave the Company’s lands north of the Limpopo defenceless. In late March 1896 the killing of settlers and their black servants began and by the end of the month the only surviving settlers were barricaded in the four main towns, Bulawayo (which had grown up on the site of Lobengula’s capital), Belingwe, Gwelo and Mangwe. On 28 March 1896, Captain Pittendrigh set out with 12 horsemen to rescue a small party of Europeans who had been surrounded by the Matabele at Inyati, 50 miles north of Bulawayo. With the exception of a clergyman and his wife, who were given safe conduct by the Matabele, the remaining Europeans were killed when they tried to escape. Meanwhile, Pittendrigh and his men were ambushed but reached Campbell’s Store, on the Bembesi river, thirty-five miles from Bulawayo. They fortified this as best they could and it also provided refuge for the Europeans from Queen’s Mine. A further patrol, commanded by Captain R MacFarlane, now set out from Bulawayo to rescue Pittendrigh. The patrol found Queen’s Mine deserted but had to run the gauntlet of a Matabele ambush before reaching Campbell’s Store at dawn on 30 March. It soon became clear that Troopers Celliers and H S Henderson, who had been riding ahead of the patrol, were missing. During the skirmish Celliers had been shot in the knee and his horse mortally wounded. Finding they were unable to rejoin the main patrol, Henderson, who had already shown great courage in riding from Queen’s Mine to Bulawayo to seek help, led his horse, which bore the injured Celliers, the thirty-five miles back to Bulawayo. The journey, through hostile country, took them two days. In the meantime, MacFarlane had escorted the Europeans at Campbell’s Store to safety in the town. Celliers refused to have his leg amputated and eventually gangrene set in. The operation was performed too late and Celliers died on 16 May 1896.

On the morning of the 30th March, 1896, just before daylight, Captain Macfarlane’s party was surprised by the natives. Troopers Celliers and Henderson, who formed part of the advanced guard, were cut off from the main body, and Celliers was shot through the knee. His horse also was badly wounded and eventually died. Henderson then placed Celliers on his own horse, and made the best of his way to Buluwayo. The country between Campbell’s Store, where they were cut off, and Buluwayo, a distance of about thirty-five miles, was full of natives fully armed, and they had, therefore, to proceed principally by night, hiding in the bush in the daytime. Celliers, who was weak from loss of blood, and in great agony, asked Henderson to leave him, but he would not, and brought him in, after passing two days and one night in the veldt without food.