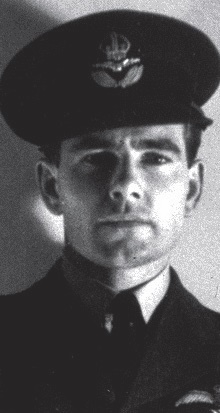 On 4 July 1941 fifteen Blenheims took off from RAF Swanton Morley, north-east of Dereham, Norfolk, under Acting Wing Commander H I Edwards on a low-level bombing raid of the north-east German port of Bremen. The city was heavily defended and four of the planes were shot down and the rest damaged. Edwards’ navigator, Pilot Officer Ramsay, was awarded the DFC for the action and his gunner, Sergeant G Quinn, a Bar to his DFM.

Wing Commander Edwards, although handicapped by a physical disability resulting from a flying accident, has repeatedly displayed gallantry of the highest order in pressing home bombing attacks from very low heights against strongly defended objectives. On 4th July, 1941, he led an important attack on the Port of Bremen, one of the most heavily defended towns in Germany. This attack had to be made in daylight and there were no clouds to afford concealment. During the approach to the German coast several enemy ships were sighted and Wing Commander Edwards knew that his aircraft would be reported and that the defences would be in a state of readiness. Undaunted by this misfortune he brought his formation 50 miles overland to the target, flying at a height of little more than 50 feet, passing under high-tension cables, carrying away telegraph wires and finally passing through a formidable balloon barrage. On reaching Bremen he was met with a hail of fire, all his aircraft being hit and four of them being destroyed. Nevertheless he made a most successful attack, and then with the greatest skill and coolness withdrew the surviving aircraft without further loss. Throughout the execution of this operation which he had planned personally with full knowledge of the risks entailed, Wing Commander Edwards displayed the highest possible standard of gallantry and determination.