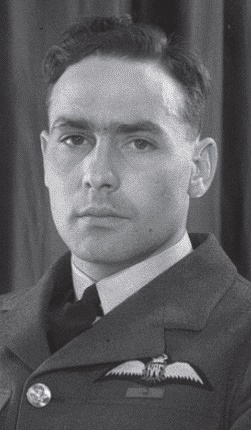 On 17 April 1942, twelve Lancaster bombers from No 44 and No 97 Sqns, the former based at RAF Waddington, four miles south of Lincoln, attacked the Maschinenfabrik Augsburg- Nürnberg factory at Augsburg, 30 miles north-west of Munich, an important manufacturer of diesel engines for German submarines. To escape radar detection, the planes flew at very low level in daylight without a fighter escort. Only five of the twelve aircraft returned.

Squadron Leader Nettleton was the leader of one of two formations of six Lancaster heavy bombers detailed to deliver a low-level attack in daylight on the diesel engine factory at Augsburg in Southern Germany on April 17th, 1942. The enterprise was daring, the target was of high military importance. To reach it and get back, some 1,000 miles had to be flown over hostile territory. Soon after crossing into enemy territory his formation was engaged by 25 to 30 fighters. A running fight ensued. His rear guns went out of action. One by one the aircraft of his formation were shot down until in the end only his own and one other remained. The fighters were shaken off but the target was still far distant. There was formidable resistance to be faced. With great spirit and almost defenceless, he held his two remaining aircraft on their perilous course and after a long and arduous flight, mostly at only 50 feet above the ground, he brought them to Augsburg. Here anti-aircraft fire of great intensity and accuracy was encountered. The two aircraft came low over the roof tops. Though fired at from point blank range, they stayed the course to drop their bombs true on the target. The second aircraft, hit by flak, burst into flames and crash-landed. The leading aircraft, though riddled with holes, flew back safely to base, the only one of six to return. Squadron Leader Nettleton, who has successfully undertaken many other hazardous operations, displayed unflinching determination as well as leadership and valour of the highest order.