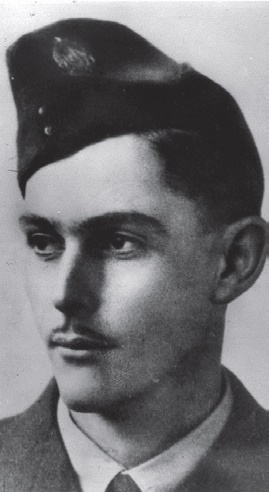 Following the launch of Operation Torch, the Allied invasion of North Africa, on 8 November 1942, industrial sites in Italy were targeted to divert and hinder the Axis war effort. Apart from raids on Genoa, Turin was bombed on the nights of 18-19, 20-21, 28-29 and 29-30 of November. In the raid of 28-29 November over 200 bombers took part. These included Short Stirlings, the RAF’s first four-engined bombers, which had a poor performance at higher altitudes. Flight Sergeant R H Middleton’s plane was badly damaged during his attack on the Fiat works at Turin. He was able to pilot it back across occupied Europe to the English Channel but the fact that its automatic pilot was out of action meant that someone with his severe injuries was unlikely to have sufficient time to leave the plane. The flight engineer Sergeant James Jeffery and Sergeant John Mackie, the front gunner, remained with him after the rest of the crew had been ordered to bale out. Of these, Pilot Officers G Royde and N Skinner were awarded the DFC and Flight Sergeants L Hyder, P Gough and D Cameron the DFM.

Flight Sergeant Middleton was captain and first pilot of a Stirling aircraft detailed to attack the Fiat Works at Turin one night in November, 1942. Great difficulty was experienced in climbing to 12,000 feet to cross the Alps, which led to excessive consumption of fuel. So dark was the night that the mountain peaks were almost invisible. During the crossing Flight Sergeant Middleton had to decide whether to proceed or turn back, there being barely sufficient fuel for the return journey. Flares were sighted ahead and he continued the mission and even dived to 2,000 feet to identify the target, despite the difficulty of regaining height. Three flights were made over Turin at this low altitude before the target was identified. The aircraft was then subjected to fire from light anti-aircraft guns. A large hole appeared in the port main plane which made it difficult to maintain lateral control. A shell then burst in the cockpit, shattering the windscreen and wounding both pilots. A piece of shell splinter tore into the side of Flight Sergeant Middleton’s face, destroying his right eye and exposing the bone over the eye. He was probably wounded also in the body or legs. The second pilot received wounds in the head and both legs which bled profusely. The wireless operator was also wounded in the leg. Flight Sergeant Middleton became unconscious and the aircraft dived to 800 feet before control was regained by the second pilot, who took the aircraft up to 1500 feet and released the bombs. There was still light flak, some very intense, and the aircraft was hit many times. The three gunners replied continuously until the rear turret was put out of action. Flight Sergeant Middleton had now recovered consciousness and, when clear of the target, ordered the second pilot back to receive first aid. Before this was completed the latter insisted on returning to the cockpit, as the captain could see very little and could only speak with loss of blood and great pain. Course was set for base and the crew now faced an Alpine crossing and a homeward flight in a damaged aircraft with insufficient fuel. The possibilities of abandoning the aircraft or landing in Northern France were discussed but Flight Sergeant Middleton expressed the intention of trying to make the English coast, so that his crew could leave the aircraft by parachute. Owing to his wounds and diminishing strength, he knew that, by then, he would have little or no chance of saving himself. After four hours, the French coast was reached and here the aircraft, flying at 6,000 feet, was once more engaged and hit by intense light anti-aircraft fire. Flight Sergeant Middleton was still at the controls and mustered sufficient strength to take evasive action. After crossing the Channel there was only sufficient fuel for 5 minutes flying. Flight Sergeant Middleton ordered the crew to abandon the aircraft while he flew parallel with the coast for a few miles, after which he intended to head out to sea. Five of the crew left the aircraft safely, while two remained to assist Flight Sergeant Middleton. The aircraft crashed in the sea and the bodies of the front gunner and flight engineer were recovered the following day. Their gallant captain was apparently unable to leave the aircraft and his body has not been traced. Flight Sergeant Middleton was determined to attack the target regardless of the consequences and not to allow his crew to fall into enemy hands. While all the crew displayed heroism of a high order, the urge to do so came from Flight Sergeant Middleton, whose fortitude and strength of will made possible the completion of the mission. His devotion to duty in the face of overwhelming odds is unsurpassed in the annals of the Royal Air Force.