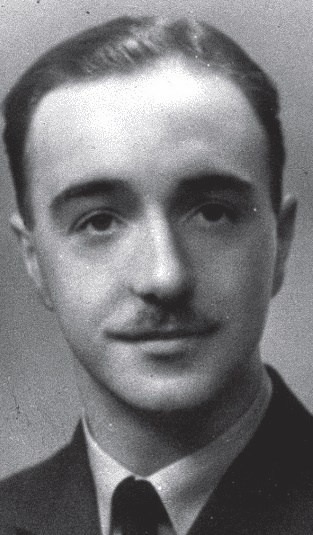 On 3 November 1943 a force of 600 planes bombed Düsseldorf. The city lies on the east bank of the Rhine, south-west of the Ruhr.

On the night of November 3rd, 1943, Flight Lieutenant Reid was pilot and captain of a Lancaster aircraft detailed to attack Dusseldorf. Shortly after crossing the Dutch coast, the pilot’s windscreen was shattered by fire from a Messerschmitt 110. Owing to a failure in the heating circuit, the rear gunner’s hands were too cold for him to open fire immediately or to operate his microphone and so give warning of danger; but after a brief delay he managed to return the Messerschmitt’s fire and it was driven off. During the fight with the Messerschmitt, Flight Lieutenant Reid was wounded in the head, shoulders and hands. The elevator trimming tabs of the aircraft were damaged and it became difficult to control. The rear turret, too, was badly damaged and the communications system and compasses were put out of action. Flight Lieutenant Reid ascertained that his crew were unscathed and, saying nothing about his own injuries, he continued his mission. Soon afterwards, the Lancaster was attacked by a Focke Wulf 190. This time, the enemy’s fire raked the bomber from stem to stern. The rear gunner replied with his only serviceable gun but the state of his turret made accurate aiming impossible. The navigator was killed and the wireless operator fatally injured. The mid-upper turret was hit and the oxygen system put out of action Flight Lieutenant Reid was again wounded and the flight engineer, though hit in the forearm, supplied him with oxygen from a portable supply. Flight Lieutenant Reid refused to be turned from his objective and Dusseldorf was reached some 50 minutes later. He had memorised his course to the target and had continued in such a normal manner that the bomb-aimer, who was cut off by the failure of the communications system, knew nothing of his captain’s injuries or of the casualties to his comrades. Photographs show that, when the bombs were released, the aircraft was right over the centre of the target. Steering by the pole star and the moon, Flight Lieutenant Reid then set course for home. He was growing weak from loss of blood. The emergency oxygen supply had given out. With the windscreen shattered, the cold was intense. He lapsed into semi-consciousness. The flight engineer, with some help from the bomb-aimer, kept the Lancaster in the air despite heavy anti-aircraft fire over the Dutch coast. The North Sea crossing was accomplished. An airfield was sighted. The captain revived, resumed control and made ready to land. Ground mist partially obscured the runway lights. The captain was also much bothered by blood from his head wound getting into his eyes. But he made a safe landing although one leg of the damaged undercarriage collapsed when the load came on. Wounded in two attacks, without oxygen, suffering severely from cold, his navigator dead, his wireless operator fatally wounded, his aircraft crippled and defenceless, Flight Lieutenant Reid showed superb courage and leadership in penetrating a further 200 miles into enemy territory to attack one of the most strongly defended targets in Germany, every additional mile increasing the hazards of the long and perilous journey home. His tenacity and devotion to duty were beyond praise.