Kim Hughes GC was born on 12 Sept 1979 in Münster, Germany where his father was serving in the Royal Electrical and Mechanical Engineers. His Family returned to the UK in 1985, where Kim was educated at William Reynolds Junior School and Thomas Telford School in Telford, Shropshire. Kim joined the Army in Oct 1997 as a Driver within the Royal Logistics Corp (RLC), before transferring trade to Ammunition Technician three years later. He currently holds the rank of Warrant Officer Class 1 and is serving within 11 EOD Regt RLC. Kim is extremely supportive of Military Charities and is both a Patron for Tickets for Troops and an Official Ambassador for the ABF 'The Soldiers Charity' speaking at events across the UK. 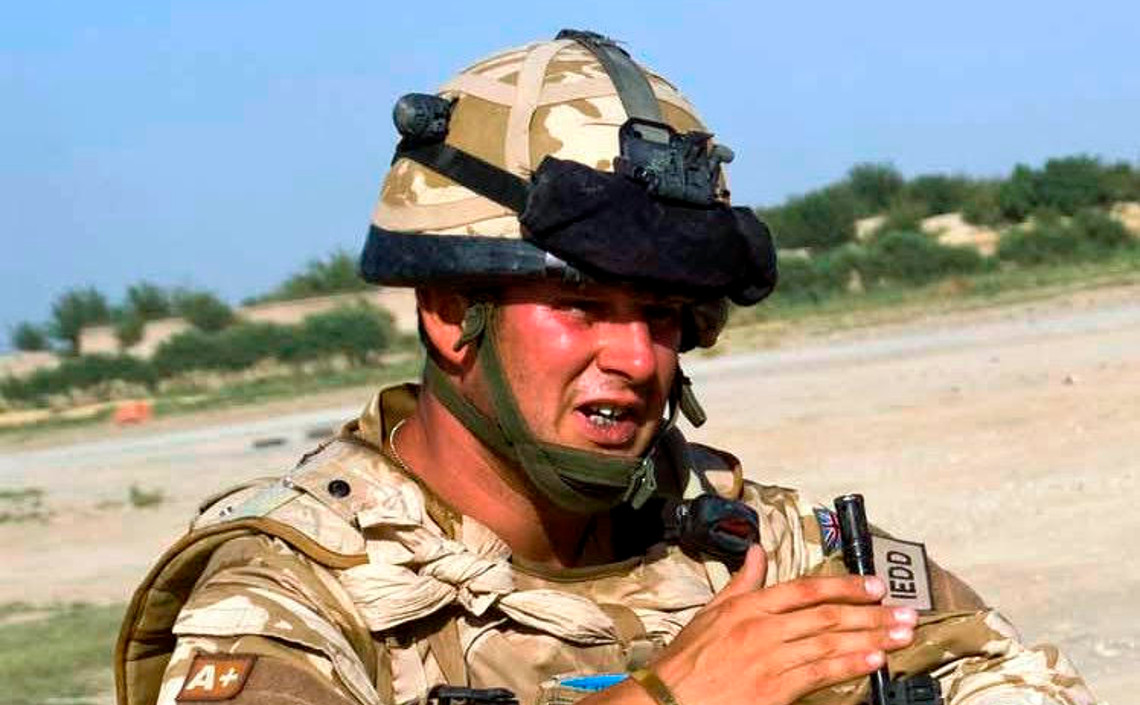 On 16 August 2009, Staff Sergeant Hughes, a High Threat Improvised Explosive Device Disposal (IEDD) operator, along with a Royal Engineers Search Team (REST), was tasked to provide close support to the 2 Rifles Battlegroup during an operation to clear a route, south west of Sangin. In preparation for the operation, elements of A Company deployed early to secure an Emergency Helicopter Landing Site and isolate compounds to the south of the route as part of the inner cordon. Whilst conducting these preliminary moves the point section initiated a Victim Operated IED (VOIED) resulting in a very serious casualty. During the casualty recovery that followed, the stretcher-bearers initiated a second VOIED that resulted in 2 personnel being killed outright and 4 other very serious casualties, one of whom later died from his wounds. The area was effectively an IED minefield, over-watched by the enemy and the section were stranded within it. Hughes and his team were called into this harrowing and chaotic situation to extract the casualties and recover the bodies. Speed was absolutely essential if further lives were not to be lost. Without specialist protective clothing in order to save time, Hughes set about clearing a path to the injured, providing constant reassurance that help was on its way. On reaching the first badly injured soldier he discovered a further VOIED within one metre of the casualty that, given their proximity, constituted a grave and immediate threat to the lives of all the casualties. Without knowing the location of the power source, but acutely attuned to the lethal danger he was facing and the overriding need to get medical attention to the casualties rapidly, Hughes calmly carried out a manual neutralisation of the device; any error would have proved instantly fatal. This was a `Category A’ action only conducted in one of 2 circumstances; a hostage scenario where explosives have been strapped to an innocent individual and a mass casualty event where not taking action is certain to result in further casualties. Both place the emphasis on saving other peoples’ lives even, if necessary, at the expense of the operator. It was an extraordinary act. With shots keeping the enemy at bay, Hughes coolly turned his attention to reaching the remaining casualties and retrieving the dead. Clearing a path forward he discovered 2 further VOIEDs and, twice more, carried out manual neutralisation. His utterly selfless action enabled all the casualties to be extracted and the bodies recovered. Even at this stage Hughes’ task was not finished. The Royal Engineers Search Team (REST) had detected a further 4 VOIEDs in the immediate area and stoically, like he has on over 80 other occasions in the last 5 months, he set about disposing of them too. Dealing with any form of IED is dangerous; to deal with 7 VOIEDs linked in a single circuit, in a mass casualty scenario, using manual neutralisation techniques once, never mind 3 times, is the single most outstanding act of explosive ordnance disposal ever recorded in Afghanistan. That he did it without the security of specialist protective clothing serves even more to demonstrate his outstanding gallantry. Hughes is unequivocally deserving of the highest level of public recognition.