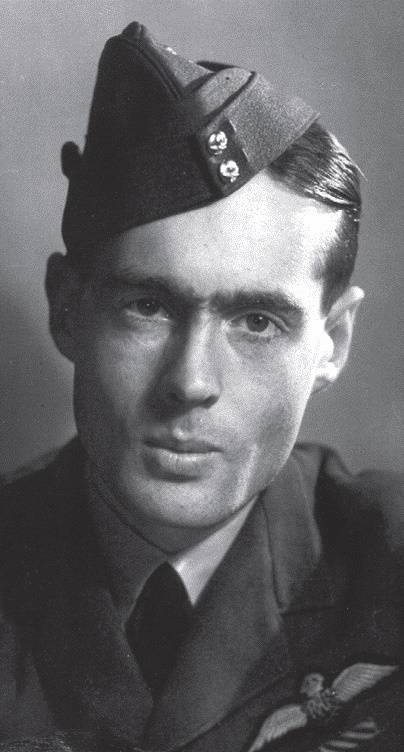 With Wing Commander G Gibson VC and Squadron Leader H B Martin, Wing Commander G L Cheshire was one of the three outstanding RAF bomber pilots of the Second World War. All belonged to No 617 Squadron. British bombing of Germany had begun in May 1940. Cheshire was awarded the VC for his gallantry in four tours of duty between June 1940 and July 1944. He was a leading advocate and pioneer of the method of flying low to mark the target. The Citation makes particular reference to his participation in the raid on Munich on the night of 24 April 1944.

This officer began his operational career in June, 1940. Against strongly-defended targets he soon displayed the courage and determination of an exceptional leader. He was always ready to accept extra risks to ensure success. Defying the formidable Ruhr defences, he frequently released his bombs from below 2,000 feet. Over Cologne in November, 1940, a shell burst inside his aircraft, blowing out one side and starting a fire; undeterred, he went on to bomb his target. About this time, he carried out a number of convoy patrols in addition to his bombing missions. At the end of his first tour of operational duty in January, 1941, he immediately volunteered for a second. Again, he pressed home his attacks with the utmost gallantry. Berlin, Bremen, Cologne, Duisberg, Essen and Kiel were among the heavily-defended targets which he attacked. When he was posted for instructional duties in January, 1942, he undertook four more operational missions. He started his third operational tour in August, 1942, when he was given command of a squadron. He led the squadron with outstanding skill on a number of missions before being appointed in March, 1943, as a station commander. In October, 1943, he undertook a fourth operational tour, relinquishing the rank of group captain at his own request so that he could again take part in operations. He immediately set to work as the pioneer of a new method of marking enemy targets involving very low flying. In June, 1944, when marking a target in the harbour at Le Havre in broad daylight and without cloud cover, he dived well below the range of the light batteries before releasing his markerbombs, and he came very near to being destroyed by the strong barrage which concentrated on him. During his fourth tour which ended in July, 1944, Wing Commander Cheshire led his squadron personally on every occasion, always undertaking the most dangerous and difficult task of marking the target alone from a low level in the face of strong defences. Wing Commander Cheshire’s cold and calculated acceptance of risks is exemplified by his conduct in an attack on Munich in April, 1944. This was an experimental attack to test out the new method of target marking at low level against a heavily-defended target situated deep in Reich territory. Munich was selected, at Wing Commander Cheshire’s request, because of the formidable nature of its light anti-aircraft and searchlight defences. He was obliged to follow, in bad weather, a direct route which took him over the defences of Augsburg and thereafter he was continuously under fire. As he reached the target, flares were being released by our high-flying aircraft. He was illuminated from above and below. All guns within range opened fire on him. Diving to 700 feet, he dropped his markers with great precision and began to climb away. So blinding were the searchlights that he almost lost control. He then flew over the city at 1,000 feet to assess the accuracy of his work and direct other aircraft. His own was badly hit by shell fragments but he continued to fly over the target area until he was satisfied that he had done all in his power to ensure success. Eventually, when he set course for base, the task of disengaging himself from the defences proved even more hazardous than the approach. For a full twelve minutes after leaving the target area he was under withering fire but he came safely through. Wing Commander Cheshire has now completed a total of 100 missions. In four years of fighting against the bitterest opposition he has maintained a record of outstanding personal achievement, placing himself invariably in the forefront of the battle. What he did in the Munich operation was typical of the careful planning, brilliant execution and contempt for danger which has established for Wing Commander Cheshire a reputation second to none in Bomber Command.