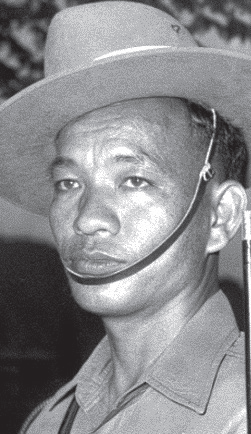 On 5 March 1944 Operation Thursday launched the second Chindit Expedition in Burma, with the aim of assisting General Stilwell drive the Japanese out of northern Burma and reopen a land route into south-west China. Nearly 10,000 men were airlifted into the region and on 27 May 77th Brigade was ordered to capture Mogaung, the last major town on the railway before Myitkyina on the Irrawaddy River. By 6 June Pin Hmi village about a mile east of Mogaung had been secured. However, Pin Hmi Bridge remained in Japanese hands despite two attempts to capture it. Instead, the Gurkhas captured Mahaung village to the west of Pin Hmi Bridge and the following day attacked it from the rear, taking it at the second attempt. On 23 June the Allies attacked Mogaung itself and captured the railway bridge over the river. By the 26th the town was in their hands. Myitkyina was captured on 3 August.

In Burma on June 23rd, 1944, a Battalion of the 6th Gurkha Rifles was ordered to attack the Railway Bridge at Mogaung. Immediately the attack developed the enemy opened concentrated and sustained cross fire at close range from a position known as the Red House and from a strong bunker position two hundred yards to the left of it. So intense was this cross fire that both the leading platoons of “B” Company, one of which was Rifleman Tulbahadur Pun’s, were pinned to the ground and the whole of his Section was wiped out with the exception of himself, the Section Commander and one other man. The Section Commander immediately led the remaining two men in a charge on the Red House but was at once badly wounded. Rifleman Tulbahadur Pun and his remaining companion continued the charge, but the latter too was immediately badly wounded. Rifleman Tulbahadur Pun then seized the Bren Gun, and firing from the hip as he went, continued the charge on this heavily bunkered position alone, in the face of the most shattering concentration of automatic fire, directed straight at him. With the dawn coming up behind him, he presented a perfect target to the Japanese. He had to move for thirty yards over open ground, ankle deep in mud, through shell holes and over fallen trees. Despite these overwhelming odds, he reached the Red House and closed with the Japanese occupants. He killed three and put five more to flight and captured two light machine guns and much ammunition. He then gave accurate supporting fire from the bunker to the remainder of his platoon which enabled them to reach their objective. His outstanding courage and superb gallantry in the face of odds which meant almost certain death were most inspiring to all ranks and were beyond praise.